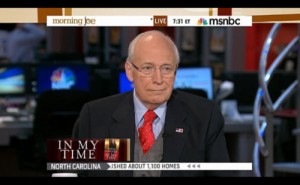 Dick Cheney joined Joe Scarborough on Morning Joe today to discuss his In My Time, “a remarkable memoir by a remarkable man,” according to Scarborough. Cheney warmed the set by sending cupcakes to co-host Mika Brzezinski, who has gotten great laughs at the former VP’s expense in the past, but they were not so sugared up as to forget why they were there.

Now, Cheney covers a lot of material in his 576-page, “head-exploding” memoir, and what he missed, he seems to be getting to in his extensive publicity run. Scarborough and friends were thus challenged with finding a new, and unusual angel of approach. They opted to start things off with a softball of a question:

“What changed Dick Cheney? From the man who was seen by everybody as the moderate voice of Rebuplicanism in Washington, DC, to a man who seemed to morph overnight to Darth Vader… What caused this transformation, first of all, and secondly, how tough has it been for your family to deal with that transformation?”

Just kidding, that doesn’t sound like a soft-ball at all. But Cheney isn’t phased at all, and without even a hint of the existential terror we certainly would be feeling were we in his seat, he is ready with an answer:

“Well, it wasn’t tough to deal with the transformation. After you’ve been vice-president for a few years, subject of all the jokes on Leno and Letterman, you’re fodder for late night comedians, you need to have a pretty thick skin just to get up every morning and function. I never it let it bother me.”

So there you have it. With the help of Jay Leno and David Letterman with all their jokes that Brzezinski likes so much, Dick Cheney learned to toughen up. This might explain the cupcakes.

Otherwise, Cheney seems to believe that he didn’t change so much as the circumstances of his job did, and this is a point that he comes back to more than once. Regarding the public’s perception that he changed, he says that, “I was doing something that hadn’t been done very often as vice president … I wasn’t really in charge of anything … but there were things that needed to be done, I chose to do them, the president wanted me to do them.” He cites 9/11 as one such event that required change action and attitude on his part, but only relatively so. “There’s this conventional wisdom that says there was a period of time back there that was warm and fuzzy, but that’s not what I remember,” he says, making the point that things are always difficult in Washington, and politicians are always working to adjust. What the media likes to perceive as change, he seems to be saying, is just part of the job.

Watch the rest of the segment below: