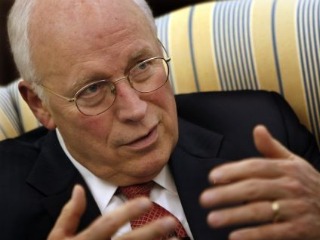 Former vice president Dick Cheney stopped by The Laura Ingraham Show, continuing his media blitz to promote his memoir. And while promotional interviews tend to sound like a series of echos after a while (think “enhanced methods of interrogation” played over and over and over on a loop, perhaps as an enhanced method of interrogation) , Cheney managed to offer a little something new regarding none other than former Alaska Governor Sarah Palin.

When asked by host Laura Ingraham for a couple of examples of qualities ” that are required, not constitutionally, but necessary” for the job of vice president, Cheney answered frankly:

Thick skin. You need the capacity to turn on the tube every night and watch the late night comedians make you the punch line, tell a lot of jokes, it goes with the turf and I’m not above telling a few of those stories myself. But the fact of the matter is you really do need to have the capacity to do what you think is right, to offer the advice you think the president of the country needs, you have to remember you are not in charge of anything, you don’t run anything as Vice President. And you do need to have thick skin, you’ll be subject to a lot of criticism, some of it funny, some of it not so funny.

Ingraham immediately followed up by asking Cheney about his thoughts on Palin. Does he think she was well-suited for the position?:

Well, I’ve never gotten around the question of her having left the governorship of Alaska midterm. I’ve never heard that adequately explained so that I could understand why, how she decided in her first term to step down and still be–I’d like to know more about that

Listen for yourselves, courtesy of The Laura Ingraham Show: