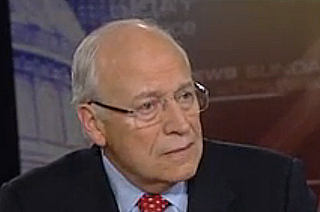 Dick Cheney staunchly defended the NSA surveillance programs started under his tenure as Vice President, telling Chris Wallace on Fox News Sunday that the programs could have stopped 9/11 had they been in effect, and that Edward Snowden was a traitor for revealing the information and fleeing to China.

“When you had the hijackers in 9/11, they were in contact with their leadership overseas and the rest of the organization in the States,” Cheney said. “If we had been able to read their mail and intercept communications, and pick up from the calls overseas the numbers here that they were using in the United States, we would then have been able to thwart the attack.”

In contrast to critics like Rand Paul, Cheney believes the government was justified in expanding the scope of surveillance to all phone metadata, even of people not suspected of crimes, claiming that wartime footing allows additional national security measures.

“Congress authorized the president to use military force to deal with the crisis,” Cheney said, referring to the War on Terror. “That puts you in the category of using your military assets, intelligence assets and so forth in order to protect the country against another attack. When you consider somebody smuggling a nuclear device into the United States it becomes very important to gather intelligence on your enemies and stop the attack before it is launched.”

This wartime footing also justified keeping the program a secret, as revealing it would be giving a military adversary crucial strategic information.

“If you think about what we were able to do in World War II,” Cheney said, “reading Ultra, the Germans’ coded communications, vital in our success in that venture. We could have announced it to the world, could have had this kind of debate, but it would have destroyed the ability to collect it…The threat now isn’t just overseas or a foreign power. The threat now is terrorists coming back into the United States using deadlier weapons than ever before to launch an attack. We have to know what they are doing, we need to know who they are in contact with in the United States.”

Cheney had no kind words for Snowden, whom he forthrightly labelled a traitor. “I think he has committed crimes in effect by violating the agreements given the position he had,” Cheney said, and went on to question his choice of hideout. “I’m suspicious because he went to China. That’s not a place where you would ordinarily want to go if you are interested in freedom, liberty and so forth. It raises questions whether or not he had that kind of connection before he did this.”

“I am very, very worried that he still has additional information that he hasn’t released yet,” Cheney continued, “that the Chinese would welcome the opportunity and probably willing to provide immunity for him or sanctuary for him, if you will, in exchange for what he presumably knows or doesn’t know…I don’t think this is a one-off disclosure.”

Cheney also defended the data grabbed by the NSA as well below the invasive extent of its media portrayal.

“That’s not private information,” Cheney said of phone records. “According to the Supreme Court those are business records of the telephone company…The allegation is out there that somehow we’ve got all this personal information on Aunt Fanny or Chris Wallace or whoever it might be and we’re pouring through it. That’s not the way it works.”

Cheney reserved his final harsh judgment for President Obama. “I don’t think he has credibility,” Cheney said. “We’ve got an important point where the president of the United States ought to say, this is a righteous program, it’s good program, saving American lives and I support it. The problem is the guy has failed to be forthright and honest and credible on things like Benghazi and the IRS. He’s got no credibility.”