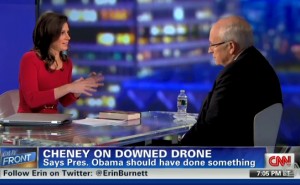 Former Vice-President Dick Cheney appeared as a guest on Erin Burnett OutFront Tuesday night, and hit on topics ranging from what President Barack Obama should have done with the downed drone in Iran to his thoughts on the Arab Spring.

Cheney told Burnett that it was his understanding that President Obama had three choices when he learned about the downed drone — sending in people to recover it, destroying it with an airstrike, or asking for them to return it. While Cheney believed the first option would have been very difficult, he told Burnett that the second would have been a much better option than what the President eventually did, which was, in his estimation, “ask nicely” for the drone to be returned.

Later in the interview, Cheney noted that he hadn’t endorsed a GOP candidate, preferring to stay out of the fray and sell his book instead. But when Burnett asked about Newt Gingrich (a man Cheney considers “an old friend”) possibly seeing a drop in the polls, Cheney said that Americans should give him the benefit of the doubt:

“We came to Congress together at the same time in [1978]. When Newt showed up, he said we can become the majority, we can take back the House of Representatives. We hadn’t had the House since the 1940s. Initially, none of us believed him. But he was persistent and he was tenacious — he kept it up and kept it up and kept it up — and finally, by ’94, he’s the newly-elected Speaker of the House of Representatives, with a Republican majority. So I wouldn’t underestimate him.”

Watch the interview with Cheney below, courtesy of CNN: