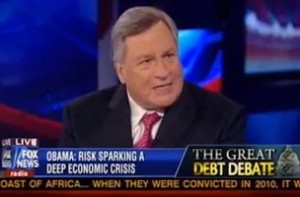 On Monday night’s Hannity show, Fox News contributor Dick Morris unwittingly clarified the current debt ceiling debate between a cuts-only approach that continues the free ride for the wealthy, and a balanced approach that entails shared sacrifice. Morris accused the President of “fear tactics” surrounding a possible default, then in the same breath explained that eliminating a mortgage interest deduction for the wealthiest 2% would crater the mansion-building industry, and cost carpenters and bricklayers their jobs.

Morris and host Sean Hannity pooh-pooh the importance of the August 2 deadline by detailing all of the ways in which the US can bust open penny jars and ransack couch cushions to pay debt service, ignoring the effect that such moves would have on global financial markets, and reducing the consequences of unmet obligations to “You won’t get your passport.”

While everyone else (even John Boehner said, just last night, that default is unacceptable) agrees that the looming default is a gun to the head of the US economy, Hannity and Morris would have you believe that, come Aug. 2, that gun will produce a flag that says “Bang!”

What’s really fascinating is what does scare Morris. Global financial crisis? No biggie. Adjust the tax code for the wealthiest two percent? That’s a disaster.

“Increase taxes on the top 2% of the country, by taking away their mortgage interest deduction,” Morris says, “it is going to dry up almost half of the home building in the United States. so every carpenter,very mason, every brick layer, it didn’t mter how much money you mke, you are going to lose your job and wages, because the rich won’t be able to have a mortgage interest deduction so they are not going to bill houses that are that expensive.”

Let that sink in for a minute. Ignoring the fallacy that there’s anything that can affect consumption by the wealthy, he’s saying that Americans who have lost their jobs, lost their homes, lost their retirement savings ought to count their blessings. Mess with the wealthy, and they might not let you build their mansions for them. Hell, they might even have to raise prices on cake. Then, what are you gonna eat?