Dick Morris: Gulf Disaster Is For Liberals What Health Care Was For Conservatives 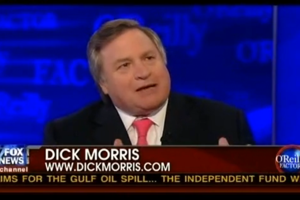 On Tuesday, former Clinton staffer and Fox News analyst Dick Morris was blaming the BP oil disaster on his old boss, citing a 1995 law that gave oil companies incentives to drill far offshore. On last night’s O’Reilly Factor, Morris went after President Obama for lacking the executive skills necessary to find solutions to the cleaning the Gulf, and noted that liberals have turned on the President because they take environmental matters “very personally.”

Morris’ initial reaction to the backlash from the president’s base last night was to quip that “they are Democrats; they form firing squads in circles,” but later explained what he saw as a rejection produced by the fact that environmental affairs are a core part of the Democratic issue base. “What’s happening here,” he explained, “is that the oil spill is performing the same function on the left that health care did on the right in turning people away from Obama… they take it very personally because they are so focused on the environment.”

O’Reilly countered that he did not understand the demand for a solution because no one quite knows how to solve the problem, so asking for a solution from someone who was not an engineer seemed useless. A criticism he did understand, however, was that against his refusal to accept help in the clean-up from foreign nations like Holland. “Why is the president rejecting Holland?” he asked Morris. Morris’ answer was simple: he doesn’t know what he’s doing because he had no executive experience. O’Reilly countered that Morris was calling the president stupid, but he elaborated:

“[Obama] never asked the questions to understand… he’s not a manager. He’s a legislator, he’s an advocate, he’s a litigator… It’s not their skill. He’s not an executive. After you’ve been a governor for 20 years you learn to get past the bureaucracy and ask the questions.”