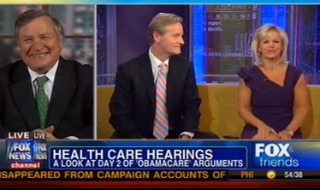 Fox News commentator Dick Morris appeared on Fox & Friends this morning, where he offered some harsh criticism of “ObamaCare,” his thoughts on the Supreme Court’s hearing on the issue so far… and what the future may hold should Obama he elected to a second term.

If the law is indeed overturned, “this will kill Obama,” Morris said. “It’s the signature achievement of his administration. The two things the guy did was the stimulus package and ObamaCare. One didn’t work and the other’s illegal? Right, that’s really going to help him.”

RELATED: Rachel Maddow: Supreme Court Vote May Show If It’s So ‘Conservatively Politicized’ As To ‘Hurt The President’

“The country will realize,” he continued, “that Obama put this country through one year of discussion, debate, cost his own party control of Congress, turned the country upside-down, probably has already spent 3 or 400 billion dollars extra… All for something that’s illegal?”

Morris also looked ahead to what else voters may expect from Obama if he’s elected to a second term:

Ooo, God. Well, I’m glad this is a morning show. If it was a late night show, my answer would give everybody nightmares. First, I think on health care, he’ll move to a single payer system. I think the Supreme Court decision — that I expect — will throw out this mandate, but single payer of course is legal under the taxing authority. Total socialized medicine, no insurance companies, no private plans, no nothing. He said in San Francisco a couple of years ago that that’s his goal, and I think it remains that.

I think that he’ll virtually stop the expansion of oil drilling. Those western states you talked about that want to drill on federal land can forget about it, and I think fracking would be set back. The whole legacy of the Bush 43 administration, which is to put us on the route to energy independence, will be derailed.

And that’s not even to mention Obama plans to “integrate the United States into the global system.” Basically: A second term for Obama would bring on a socialist nightmare hellscape as he moves further to the left.

Have a look at Morris’ comments, via Fox News: