Dick Morris: Ron Paul Is ‘By Far The Most Liberal’ 2012 Republican Candidate
video

Dick Morris: Ron Paul Is ‘By Far The Most Liberal’ 2012 Republican Candidate 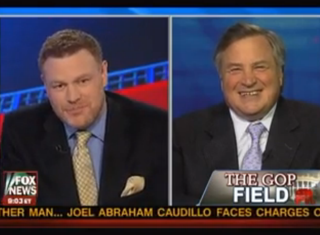 As today is considered a holiday for most workplaces, it has been a rather slow news day– which hasn’t proved very good for commentary on Rep. Ron Paul. As the frontrunner, he got much of the criticism today, with tonight’s Hannity providing Dick Morris calling Rep. Paul the most “liberal” of all the Republican candidates, universally dismissed as a “nut.”

Morris was speaking to fill-in host Mark Steyn about Rep. Paul’s frontrunner status. “He’s really, by far, the most liberal, radical candidate of the bunch– he wants to dismantle our military… legalize heroin… wants to repeal the PATRIOT Act to leave us essentially without defense against terrorism,” Morris argued. “Every time I say something like that,” Steyn joked, “I get emails that say ‘go back to Canada!'”

The conversation went on to other candidates, Newt Gingrich in particular, who Morris joked was somewhat like Napoleon: “he knew more about the battle than anyone else did… but then neglected the basics, like winter uniforms.” Similarly, Morris argued that Gingrich “forgot to raise money or build an organization.” Rick Santorum got a bit of hope from Morris, but a far less historic famous character analogy: Rodney Dangerfield, for not getting any respect in the field.

Coming back to Rep. Paul, Morris told Steyn that “everyone will be all over him” if he wins Iowa, so he couldn’t see the momentum continuing. “People treat him as a nut and they’re not really focused on him,” but once that changes, he doesn’t stand a chance in Morris’s eyes. “You’ll be fleeing to Canada in the next 48 hours,” Steyn joked.

The segment via Fox News: