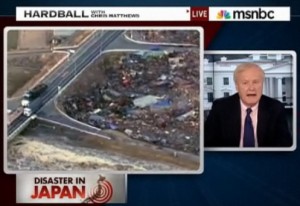 MSNBC’s Chris Matthews is the latest media personality (deservedly or not) to draw ire for a display of insensitivity regarding Japan’s still-unfolding earthquake/tsunami/nuclear crisis. The knock on the Hardball host is best summed up by Newsbusters’ headline, “Chris Matthews Sees Japan Earthquake an ‘Opportunity’ for Obama to Remind People He Was Born in Hawaii.”

A review of Matthews’ remarks, in context, paints a slightly different picture.

Conservative sites like Newsbusters, and many of our own readers, have criticized Matthews on the basis that “the first thing (he) thought of” regarding Japan’s 9.0 magnitude earthquake was the “opportunity” for Barack Obama to reinforce the fact that he was born in the United States. This would be a fair interpretation of Matthews’  remarks, if you only watched the clip that Newsbusters provided, which picks up the conversation between Matthews and Chuck Todd here: (transcript via MSNBC)

MATTHEWS: …Was this a—sort of a good opportunity for the president to remind everybody that he grew up in the United States, in Hawaii?

MATTHEWS: I mean, I thought it was—that‘s the first thing I thought of. I said, you know, with all this crazy talk, something like a huge percentage of Republicans—maybe they do it just to sort of stick it to him, but such a large number of people believe he grew up in—you know, they‘re buying this thing that is coming from Huckabee, the misspoken comment by him…

But if you roll the clip back a bit, you see that when Matthews says “The first thing I thought of,” he’s actually referring to the answer that President Obama gave a Japanese reporter at Friday’s press conference, and not the earthquake catastrophe itself: (Video from MSNBC)

As Chuck Todd’s reaction attests, it’s still a completely left-field observation, and while Matthews may not be guilty of making the wretched calculation he’s being accused of, his attention to birther bashing, even in context, reveals a stunning lack of perspective.

While varying in degree, Matthews’ remarks are of a piece with other such lapses in perspective, such as CNBC host Larry Kudlow‘s remarks Friday (for which he apologized on Twitter), but Matthews’ observation reminded me more of another Hardball segment from a few months ago. Democratic strategist Mark Penn made the jaw-droppingly awful suggestion that President Obama needed a “similar event” to the Oklahoma City bombing to “reconnect” with the American people:

Matthews didn’t bat an eye, and at the time, I thought perhaps he plowed over Penn’s gaffe out of mercy for his guest, but now, I’m not so sure.

It is natural for media figures to try and frame news events within their own spheres of expertise (for Matthews, politics, for Kudlow, the financial sector, for Mark Penn, the 5th circle of Hell), but with events as momentous as the catastrophe in Japan, it is important to remember that the world doesn’t revolve around your own blinkered corner of the mediasphere.

That is not to say that there’s no place for reporting on the secondary, or extremely tertiary, effects of a tragedy like this, but it must be done carefully, and apologetically. For example, if Kudlow had said something like “We can take some small measure of comfort in the fact that the horrific human toll of this disaster might not be compounded by an economic catastrophe,” instead of saying, “The human toll here looks to be much worse than the economic toll, and we can be grateful for that,” there would have been little basis for outrage.

Matthews’ point, though, is so far out of left field that it’s difficult to think of a way to connect those dots that doesn’t seem crass, tone-deaf, and just plain stupid. The day of the quake is a dodgy time to assess the political implications of the quake, but no amount of time passed will make its effect on the birthers make any sense.

Also worth noting about the Hardball clip is Chuck Todd’s observation about President Obama’s famously cool temperament, which doesn’t always serve him well. In watching him respond, Friday, to the Japanese reporter’s question about how he felt about the tragedy, I was struck by the contrast between the President’s words, and his demeanor. While you could hear his emotional words, he didn’t make you feel them. At this weekend’s Gridiron Dinner, President Obama cracked wise about John Boehner‘s impressive frequent crier miles, but if he really wants to “reconnect” with voters, he might want to try being a little more like Boehner, and a lot less like Mr. Spock.