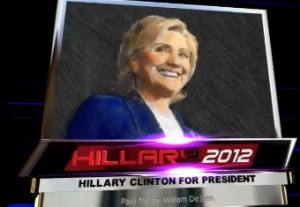 In her surprise interview with CNN yesterday, Senate candidate Christine O’Donnell casually launched an aside that made me do a double-take. She said that she’s “seen many Hillary for President ads running.”

Although I checked and found the claim wanting, there was enough wiggle room to just let it go. However, Chris Matthews called O’Donnell out on Hardball today, which is impetus enough to release the results of my rather surprising fact check. While O’Donnell’s claim isn’t quite true, she didn’t conjure it out of thin air, either.

Here’s the quick Hardball segment, in which Matthews points out O’Donnell’s inversion of the current Hillary for VP buzz:

Before we examine O’Donnell’s claim, here’s the full context, her analysis of the prospects for repeal of health care reform: (emphasis added)

“If Barack Obama vetoes that the year before his re-election, he’s setting himself up to be very vulnerable and I’ve seen many Hillary for President ads running. So if he chooses to thumb his nose at the will of the American people and ram this unrealistic, unconstitutional bill down America’s throats, then there will be consequences politically for Obama.”

This was news to Matthews, and to me. However, a little research turned up good news for O’Donnell’s would-be gaffe: there has been at least one Hillary 2012 ad, barely a month ago. So far, so good.

The problem is that this appears to be the only one, which puts the tally far short of “many.” It’s also not likely that O’Donnell actually even “saw” this ad “running,” since it was only set to run in the New Orleans, Washington, New York, Los Angeles, and Houston markets.

The ad was financed by Chicago dentist William DeJean, so while it is technically a “Hillary for President” ad, it falls short as a harbinger of political reality.

Finally, although the ad says “Hillary Clinton for President,” it actually seems to be endorsing the unholy offspring of Clinton and Max Headroom. Check it out:

So, while O’Donnell’s pants are smoking, they’re not quite on fire. Even if they were, a cold shower would take care of that.