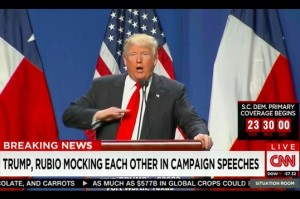 In November, Donald Trump came under fire for what appeared to be a public mocking of a New York Times reporter with a physical disability. As we’ve seen on the campaign trail from Trump, sometimes the opportunity to land a punch with the crowd at the expense of a rival is too good to pass up, and today in Texas may have been one of those times.

The GOP frontrunner was launching into a hypothetical situation about Florida Senator (and seemingly newest threat) Marco Rubio  having to meet Russian President Vladimir Putin. Trump made a gesture while referring to Rubio, which you can catch in the video below.

Trump began, “We have Putin and Putin’s gonna meet our President and let’s assume it’s Marco [gesture — audible booing rises from the crowd] no, I agree with you!”. With a hint of a knowing smile, Trump continued, “We don’t want him, ‘boo’!”.

Some people who caught the move took to Twitter to immediately ask if the gesture was a sneaky mockery of a disabled person at Rubio’s expense:

Any one else see the hand gesture by #Trump about #Rubio. I believe he just made a retarded joke about him. He slapped he chest twice.

@CNN @CNNPolitics @cnnbrk
Did Trump make a “I am retarded” gesture in reference to @marcorubio????????

Trump just made a gesture suggesting that Rubio is retarded. Classy.

Watch the above video from CNN and judge for yourself.
[image via screengrab]
—