Did Fox News Ticker Get Hacked To Read ‘Rightwingers Are Destroying The Middle Class’? (UPDATE) 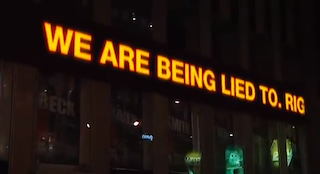 A video has been uploaded to YouTube which shows a couple of young people running up to the home of Fox News, the News Corporation offices in New York. As they’re filming, an unseen friend of theirs apparently hacks into the large, scrolling sign out front, changing it from the headlines to a lengthy message about how conservatives are lying to Americans and trying to destroy the country’s unions. The YouTube user who uploaded the video, entitled “Fox News Got HACKED. REAL.,” claims in the comments and title that he is the hacker and that this really happened. So…did it? (UPDATE BELOW)

Here’s the description from user Hiropro999, a YouTube account which was created a week ago and has only uploaded this video:

Last night I hacked into the FoxNews news ticker on 6th avenue in NYC.

Here’s the video. If you’d like to know why, just read the message in the hack.

I accessed the Fox ticker basically to get your attention. Also because Fox deserves it: they’re the 24/7 mouthpiece of the right wing. They are huge perpetuators of the big lie.

This country isn’t broke. Question is: where is the money going?

Americans have a right to know their pockets are being fleeced by corporations and tax breaks for the ultra-wealthy and we can no longer tolerate the deceit FoxNews is perpetuating.

For the record, I am not connected to Anonymous or any of the recent attacks on the PSN, PBS, Nasdaq or So-net.

We are being lied to and you cannot stop Americans from fighting for the truth. Sorry my friend is somewhat annoyingly enthusiastic in the video but it’s one of the best hacks in recent memory so cut her a break.”

The question now is whether or not this is just clever hoax. Our own Philip Bump, straight off giving his thoughts on the “Weinergate” photo, had this to say:

“The key factor that points to fakery: the flash at :40 seconds that looks like a screen being switched over.

1. There is no evidence that the display can show colors besides amber, but the display flickers with reds and blues.
2. This isn’t a TV. It’s likely a series of LEDs. Meaning that such a switchover effect is highly unlikely – more likely that it would simply switch off and then back on with new text.”

Another clue that the video is faked is the fact that we haven’t heard about the hack till now. Sure it was brief, but a number of people walked by in the video and, yet, there are no mentions online about it from the time frame that the original uploader claimed it to have occurred. Wouldn’t someone have tweeted about the incredibly technological tomfoolery they just witnessed? People I follow on Twitter tell the world when Gremlins 2 is on cable, yet no one said anything about this?

If it is a hoax, it’s similar to the video that was widely circulated a few months ago showing a man seemingly hacking screens in Times Square. That video was revealed to be viral marketing for the movie Limitless. However, real or not, the video is a clever idea that will surely get the political message of whomever made it out there pretty quickly.

UPDATE: Fox News has confirmed with Mediaite that the video is fake and that there was not a real hack.