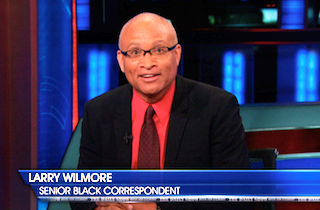 When David Letterman announced his retirement just 5 weeks ago, he kicked off a chain reaction that resulted in a seemingly unprecedented number of late night television time slots ripe for the taking. Inevitably, the big question that media critics everywhere began asking was: Isn’t it time for some non-white guys in late night?

Last night, Comedy Central attempted to answer that question by announcing Stephen Colbert’s replacement at 11:30 p.m. following The Daily Show. Starting in January 2015, that show’s Senior Black Correspondent Larry Wilmore will host The Minority Report, “a comedic look at news, current events and pop culture from unique perspectives not typically on display in late night television,” according to the network’s press release.

In an interview with The New York Times’ Bill Carter, Comedy Central president Michele Ganeless said the idea for the show came straight from Jon Stewart, who will serve as a producer as he has done for the last nine years on The Colbert Report. The Daily Show host thought the time slot following his would be the perfect venue to “provide an opportunity for the underrepresented voices out there,” according to Ganeless.

The Minority Report will mimic cable news panel shows in the vein of Fox News’ The Five or MSNBC’s The Cycle in the way that The Colbert Report took its inspiration from The O’Reilly Factor. But instead of a free-flowing conservation, the initial idea is that it will consist of scripted comedy pieces, not unlike Wilmore’s comedic conversations with Stewart — often about race — at the Daily Show desk. And while those cable news panel shows tend to have a diversity of gender, they are somewhat less diverse when it comes to race and ideology.

So, will this new, diversity-oriented show satisfy those clamoring for more diversity in late night? We will of course have to wait and see how it plays out, but it could definitely go either way. On the one hand, Jon Stewart and Comedy Central have declared definitively that they want to produce a show that puts diverse voices in the foreground, giving comedians who may not otherwise get a platform a place where they can share their views on a wide variety of issues. Instead of being the “senior black correspondent” who shows up once every few weeks on The Daily Show, Wilmore will get equal time to Stewart.

But on the other hand, there is a risk that by putting its “minority” talent all together in one place on this show, it actually separates them from the late night mainstream that is still dominated by white guys named Jimmy. By so blatantly making the show about race does Comedy Central risk sending the message to white people that this show isn’t for them? And, with Craig Ferguson’s spot on CBS still open, will that network feel less pressure to make a supposedly risky, non-white guy choice?

I hope that’s not the case and that this show will draw as many, if not more viewers than Colbert did. I’m also looking forward to the inevitable token white guy on the panel, who the rest of the group can playfully tease the way The Five has turned the token “liberal” Bob Beckel into a sad sack punching bag. If we’re really lucky, Colbert will drop by from time to time in character to act as the show’s token “conservative.”

If there is a Daily Show precursor to The Minority Report, it has to 2012’s “The Great Black American Panel,” in which Wilmore was joined by Wyatt Cenac and Jessica Williams to stick it to Sean Hannity for his “bombshell” report on President Barack Obama’s blackness.

With Stewart moderating, the group felt the need to embrace the same angry black stereotype that Hannity had created for Obama. But when the host let them talk amongst themselves, a more nuanced — but still hilarious — discussion of politics and race emerged. If this is the type of segment we can expect from The Minority Report, then we should be in good shape.