Did Keith Olbermann Blink In War With MSNBC? 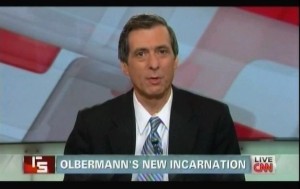 On Sunday morning’s Reliable Sources, host Howard Kurtz and panel discussed the debut of Keith Olbermann‘s Countdown II: The Wrath of KO, and former Mediaite-er Glynnis MacNicol made a great observation about Olbermann’s ostensible olive branch to former colleague Rachel Maddow. She noted that Olbermann’s strategic demonization of MSNBC (noted here awhile back) doesn’t seem to be working, and that his decision not to overlap with Maddow’s show could represent a step away from that strategy.

Glynnis and fellow panelists David Zurawik and Aaron Barnhart observed that meeting the new Olbermann was about the same as watching the old Olbermann, which is a testament to the degree to which Olbermann was able to resist the fetters that he now insists he is free of. Frequent Olbermann critic Zurawik gave the show high marks for production values, and in many ways, the transition from the old Countdown to the new was seamless. However, the show continues to have problems with its audio mix, a distracting weakness that lends the otherwise slick show the aura of a made-for-SyFy plague thriller.

Zurawik also dinged Olbermann over his “rancor” and use of insults, but I think he missed the mark a little bit. Olbermann’s ability to go at his opponents has long been a key to his appeal. The problem is that the rancor and the insults have become increasingly artless and petty, in stark contrast to the sharp, florid wit present in much of his commentary. Zurawik says Al Gore should “rein him in,” but Gore would be better off sharpening him up.

The best observation, though, came from Glynnis MacNicol (now with Business Insider), who noted that “(Olbeermann)’s been trying to demonize MSNBC, and sort of make them the enemy he’s playing off of, and it clearly, in the first week, didn’t work, and he pulled back and said ‘Rachel Maddow’s my friend now.'”

In the run-up to the Countdown re-launch, host Keith Olbermann launched increasingly sharp barbs at his former colleagues, and condescension at his former friends. Rather than positioning himself as an alternative to Fox News, or neutral CNN, Olbermann set himself up as the “us” in an “us vs. them” battle with the only other prime time liberal cable news bloc, MSNBC. As Glynnis observed, this strategy doesn’t seem to have worked.

Despite relatively strong ratings for his debut show, Countdown didn’t make a dent in MSNBC’s ratings, and his decision to overlap with Rachel Maddow’s show caused a swift backlash from fans who didn’t feel like choosing.

Olbermann cast his decision as a desire not to hurt Maddow’s ratings, the equivalent of a mosquito generously offering not to exsanguinate a crocodile. The truth is, by targeting his old friend’s show, he was making himself look like a jerk, and costing Maddow very little. That same dynamic likely applies to viewers of other liberal MSNBC shows, as well. Even those who might like Countdown better are bound to wonder why Olbermann can’t let his show stand on the merits, rather than trash the efforts of others on the same “team.” No one likes to see Mom and Dad fight.

The good news is that the cable news town appears to be big enough for two liberal sheriffs. With an impressive (especially for a small net like Current) debut of 179,000 demo viewers, and little (if any) effect on MSNBC’s numbers, it appears more likely that the cable news landscape can support two liberal-leaning networks, rather than settling on an eventual last network standing. The next step is for Current to fill in the rest of its prime-time lineup with the right kind of talent to build on Countdown’s success.