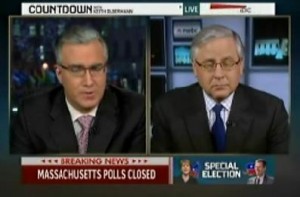 gment from last night’s Countdown is generating a lot of heat in the conservative blogosphere, with the general consensus being that Keith Olbermann cried “Racism!” on the Massachusetts special election, and cited Scott Brown’s pickup truck as an example.

I watched the exchange between Keith and Howard Fineman last night, and I don’t think the right is being fair to Keith. In fact, I think they might owe him an “attaboy” or two.

Granted, he asks the question, but as Fineman points out, it is a good question, and certainly not out of left field. Every mainstream media outlet asked whether the President’s race would be a factor during the 2008 election (including Fox News), and many on the right came out and explicitly said he only got elected because he was black. Now, it’s an outrage just to ask if the Massachusetts special election might have had a racial component to it? No sale.

It’s Fineman who brings up the pickup truck, at which point Keith references the Scott Brown ads. In the end, they conclude that no, race was not much of a factor.

I don’t think the answer is so black-and-white, pardon the pun. Barack Obama has been held up to a scrutiny whose intensity is unmatched. There are a lot of factors involved, not the least of which is the compression of the political news cycle in an attempt to retain the public’s interest following that historic campaign. Still, there is at least a superficial Jackie Robinson syndrome at work here.

White president ruins economy, blunders into unnecessary and costly war, presides over the worst terrorist attack in US history…and gets re-elected.

An honest person would have to agree that Barack Obama’s status as the first black President plays some role in shaping people’s expectations, media included. After that, it’s a matter of degree.

The thing I find most annoying about Brown’s pickup truck is that, aside from campaign signs, I can’t imagine what he’s picking up with it. My dad was a carpenter for almost 40 years, and needed his pickup truck. The idea that Scott Brown thinks he can be “one of us” by driving around an empty-bedded overcompensationmobile is what I find offensive.

Finally, I think the right should be fair, and give Keith Olbermann kudos for saying “the Republicans and the Tea Partiers will tell you…”