Did Michael Moore Own Sean Hannity Last Night? The Highlights 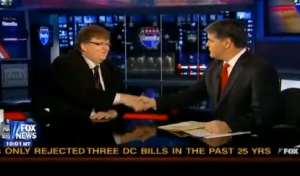 How do you explain the tenacity of Michael Moore? He’s never gotten much love from the right, and since Obama’s election, he’s been a convenient guy for those on the left to cast off to show that they’re not That Kind of Liberal.

Without debating the merits of his controversial documentaries, one thing is clear: Moore is a master of publicity. He’s been on a tear promoting his latest film, Capitalism: A Modern Love Story, chewing up some interviewers and even turning his purported cancellations into PR coups.

Last night, a guy Moore “love[s]” and said was right, Sean Hannity, interviewed Moore on his show. When he confronts his critics, Moore knows how to outflank from the right: he cited Jesus and the FBI, putting Hannity in a box. And he as much as accused Hannity, a Catholic, of lying about going to church every Sunday. The highlights below:

0:45-1:30: They start off really chummily! Fond memories of Moore being on Sean Hannity’s radio show in 2002 when Matt Drudge texted Hannity to say Moore’s book went to #1 on the bestseller list and Hannity congratulated Moore on his show. Yes, there is a media conspiracy.

3:30: Moore’s best zing, and the exchange this interview will be most remembered for:

4:00-6:30: Good comeback by Hannity: just give to charity, don’t take the system apart. Sadly, he doesn’t really follow up with it, going down the same old “but Michael Moore, you’re rich” line, which Moore has a dozen prepackaged comebacks for (i.e. I don’t charter a private jet, but those wild cards at the studio make me fly around in one sometimes)

8:45: Great putdown by Moore. Moore: “You know that there weren’t weapons of mass destruction?”
Hannity: “None that we saw, none that we found.”
Moore: “Sean, now come on. You’re not into conspiracy theories, are you?”

10:20: Soundbite from Moore: “We’re the United States of America, man! Come on! You’re afraid of a few hundred guys on monkey bars?”

Part II, 2:15: Moore, on charges that he worships Obama: “That would be against the Second Commandment… “What altar do you have at your house? To the dollar bill? To Jesus?”

Part III, start: After Hannity agrees that the FBI are “good guys,” Moore cites the FBI: “80% of the mortgage fraud has been caused by the banks and the lending institutions.”
Hannity: “Everybody got greedy.”

>>>Next Page: Video of the full interview, and a poll