Did MSNBC Edit Interview with Dem Candidate to Soften Her Position on Obamacare? 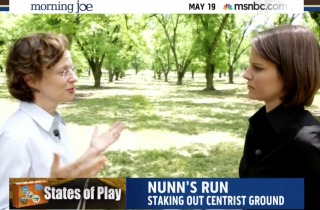 There is another editing controversy brewing at MSNBC. Republicans are pouncing on the allegation that MSNBC producers edited Georgia’s Democratic candidate for U.S. Senate Michelle Nunn’s response to a question about the Affordable Care Act to make it seem more nuanced and conservative.

“Republicans need six seats to win back the Senate, and Nunn could be the key to preventing that,” said NBC News reporter Kasie Hunt in an introduction to a packaged profile on Nunn that aired on MSNBC’s Morning Joe. “But, sometimes, it’s hard to tell she is a Democrat.”

When Hunt asked Nunn if she would have voted for the ACA, the Democratic candidate launched into a reply that dodged the question. Hunt pressed her to respond with a yes or no answer, to which Nunn replied, “I think it’s impossible to look back retrospectively and say, ‘What would you have done if you were there?’”

Well, that’s not exactly Nunn’s position. Slate’s Dave Weigel noticed that conservative groups had begun sending out Nunn’s clip on Morning Joe along with the accusation that she had refused to take a position on the ACA. Weigel learned that Nunn’s campaign had also taped the interview, as is standard practice, and the transcript Nunn’s campaign provided him showed that she did take a position on the ACA (Bolding via Weigel to illustrate the portions which aired on MSNBC):

HUNT: But you’re not sure if you would have voted yes or no?
NUNN: When I look back at what they were doing when this was passed, I think, I wish that we had more people who had tried to architect a bipartisan legislation. And who had worked together across the aisle.
HUNT: So, yes or no?
NUNN: I think it’s impossible to look back retrospectively and say, “What would you have done if you were there?” Because I wasn’t there, and we now have hindsight. What I can do is say: Here’s where we are today, and here’s what we should do, which is move forward.
HUNT: So do you think it should be repealed?
NUNN: I do not.

Nunn clearly said she would oppose the ACA’s repeal, placing her firmly in line with the majority of the members of her party.

When Nunn joined MSNBC host Joy Reid later in the day on Monday, the Democratic Senate candidate was again pressed on her position on the ACA and why she refuses to take a stand on the contentious health care law on her website. Nunn delivered another vague reply in which she only backed the expansion of Medicaid in Georgia.

Was there more to Nunn’s answer there as well?

Edits like those done to Nunn can be innocuous and may simply have been made in order to package the interview to meet broadcast time constraints. Even if this was true, however, the practical effect of those edits made Nunn seem slightly more in line with Georgia’s voters on the Affordable Care Act rather than the national Democratic Party. As the transcript that Nunn’s campaign provided Weigel shows, she is far more in tune with her party’s position on the ACA than MSNBC’s interview made it appear.

Mediaite reached out to MSNBC for comment on this matter but had not received a reply prior to this publication. This post will be updated with MSNBC’s response.

UPDATE: Responding to Mediaite’s inquiry, an MSNBC spokesperson says that the edits were made in order to comport with broadcast time constraints and not to remove content from Nunn’s interview with Hunt. The full video of Nunn’s comments on the ACA have been posted to MSNBC.com.

Correction May 20, 10:25 a.m.: An earlier version of this post linked RNC spokesman Sean Spicer‘s criticism of Kasie Hunt to the edits made to the Nunn story. Spicer’s criticism of MSNBC and Hunt was unrelated to the edits in question.