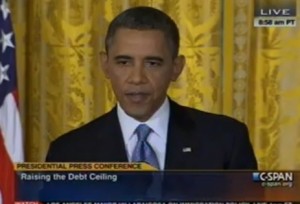 The looming debt ceiling deadline dominated much of President Obama‘s final first-term press conference, and while the President continued to place the onus for raising the debt limit on congressional Republicans, and to insist he will not negotiate on spending cuts in exchange for that increase, he may have tipped his hand on the so-called “Constitutional Option.”

The President compared the Republicans’ default threat to a restaurant “dine-and-dash,” and in doing so, delivered what could be a very relevant legal opinion.

The debt ceiling is the mechanism by which congress authorizes the government to borrow money that congress has already spent. It’s not a “blank check,” or some license to spend, it’s just the final dotted “i” on the money that congress has already spent. In 2011, congress threatened to allow the government to default, and got close enough to doing it that the U.S. government suffered its first credit downgrade in history. A second such episode could plunge the entire world into a global financial disaster.

This time around, the President has steadfastly insisted that he will not allow Republicans to hold the world economy hostage again.If he’s true to his word, that leaves the President three options.

The first is simply to refuse to negotiate, and hope that Republicans come to their senses, and pass a debt limit increase.

The second two options involve the President raising the debt ceiling unilaterally. There’s the popular-among-wonks “Platinum Coin Option,” whereby the U.S. Treasury exploits a legal loophole that allows them to mint platinum coins in any denomination, simply mints a pair of $1 trillion platinum coins, and deposits them into the treasury. That option was largely dismissed, but not completely ruled out, by White House Press Secretary Jay Carney on Friday.

The, there’s the so-called Constitutional option, whereby he unilaterally raises the debt ceiling under an interpretation of Section 4 of the 14th Amendment, which states that “The validity of the public debt of the United States, authorized by law, including debts incurred for payment of pensions and bounties for services in suppressing insurrection or rebellion, shall not be questioned.”

President Obama didn’t quite rule this option out during the last doomsday threat, but ultimately failed to exercise, saying at one point “I have talked to my lawyers. They do not — they are not persuaded that that is a winning argument,” and since then, the White House has said the option is “not available” to the President.

If the President were actually reserving the right to use one of these unilateral options, he would have to thread the difficult needle of not explicitly promising he won’t use them, while not signaling congressional Republicans that he might, which would give them the opportunity to force him into taking such an action. That would allow Republicans to avoid raising the debt ceiling themselves, while simultaneously beating President Obama up for executive overreach. It’s entirely possible, then, that the platinum coin and the 14th Amendment are off the table…until they aren’t.

With that in mind, check out this portion of today’s presser, in which NBC News’ Chuck Todd asks the President about a letter from Senate Democrats urging him to be ready with a unilateral option on the debt ceiling.  The President offered several variations on the theme that it is Congress’ job to raise the debt ceiling, and on follow-up, offered an amusing analogy.

“No simpler solution, no ready, credible solution” is not the same thing as “no other solution,” and next to the consequences of a default, an incredible, complicated, and impromptu solution might not seem so bad.

“This is not a complicated concept,” President Obama continued. “You do not go out to dinner and then eat all you want, and then leave without paying the check. If you do, you are breaking the law.” (emphasis mine)

The President went on to say that “Congress should think about the same way the American people do.”

Now, this might simply be an extension of a folksy metaphor, but it also serves as the perfect legal rationale for the 14th Amendment option, suggesting that Congress’ refusal to pass statutory borrowing authority for money it has already spent violates the constitutional imperative that the nation’s debt “shall not be questioned.”

The same Constitution that gives Congress the authority to order all those disco fries, then, also says that they must pay for them. We can’t all go in the kitchen and wash dishes. Therefore, if the President, who is also bound by the 14th Amendment, does nothing, he could be nailed by cops in the parking lot along with Congress.

That could be why you haven’t heard the President explicitly rule out these unilateral options, or encourage them. Somebody has to pay for the disco fries, but if Congress gets the idea that their dad will show up and handle it, they’ll just sit in their booth, licking their fingers.