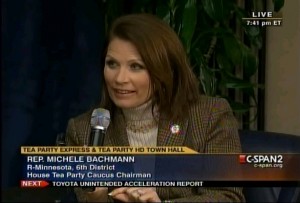 Republican Congresswoman Michele Bachmann has a history of confusing some aspects of history and has been the subject of much criticism and insults as a result. Therefore, it is certainly peculiar that Bachmann, unprovoked, frequently insists on talking about American history and leaving herself open to future challenges.

While speaking earlier tonight at the “Tea Party Express Forum” held at the National Press Club, Bachmann tried to suggest that President Obama’s intent to eventually have the government take over healthcare is not in America’s historical tradition. In her history lesson as to why everyone came to America, Bachmann suggests everyone had the same story, one where “risk-takers” came to pursue opportunity and freedom. Although from this “same story” she correctly excludes Native Americans, she fails to mention that African Americans who came to America did not share the “same story.” Is this another embarrassing moment by Bachmann where she glosses over America’s unfortunate history of slavery or merely nitpicking at her attempt to offer a broad inspirational message?

Bachmann in her own words:

“If you look through all of our history, we’ve been about risk-takers. The people that came to the United States, other than Native Americans who were here, all of us have the same story. And our story is, we come from someone who was a risk-taker from their home country, doesn’t matter what the country is, but they took a risk and they came here. And they knew when they came here they weren’t coming for a welfare state. . . . They were coming here for the thrill of writing their own ticket. . . . Who did we attract? People that wanted a better life and were willing to do what it took to get it.”

Given that it would have been weird for her to bring up slavery in the context of her positive generalization about self-reliant Americans always seeking freedom, it’s definitely justifiable to believe Bachmann’s statement was not insulting. However, given Bachmann’s own history of not necessarily knowing exactly when slavery was abolished, another historical reference that seemingly ignores the existence of slavery in our country’s history could certainly ruffle some feathers. What everyone could maybe agree on though is that Bachmann’s final assertion is weirdly cryptic: “it is almost breathtaking to even say it, but can we truly say that today we are truly free?”