Did Hannity Really Forget America Was Founded By A “Violent Revolution?” No. 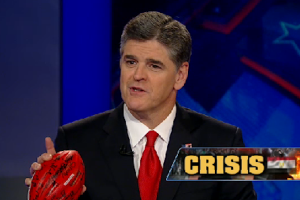 If you’ve been on Twitter or Tumblr in the past few hours, you may have seen this hilarious quote attributed to Sean Hannity: “Can you name any country that became a democracy after a violent revolution? Honestly, can you even name one?” If you did, you probably chuckled and moved on. However, with the quote being retweeted thousands of times and only one of the Tumblr versions already nearing 1,200 “notes,” we decided to check to see if this was something Hannity actually said. After all, we would have caught that if he did, right?

So, is the quote real? Short answer: no. For the long answer, I’ll explain how we figured that out.

Our first stop was over to our typical best friend in these cases, TV Eyes. When we put the quote in their powerful search engine, we came up with nothing. We were disheartened. Not because we have a problem with Sean Hannity. Rather, this just meant that we needed to prove a negative. Never fun.

Since the quote is so prevalent on Twitter (and since it’s much harder to find the history of things on Tumblr), we decided to try to find the first instance of the quote there. We found that, while it first started getting tons of retweets this afternoon, a similar quote first appeared yesterday night, right around the time that The Colbert Report aired. Yes, this started with a Colbert joke (the joke in question comes at the 2:35 point in that clip).

“The only democracy that has emerged when you see uprising like this, is in Iraq. Name me one other example. I can’t think of one in history.”

Still sounds foolish, right? Well, we then went hunting for the original clip. This took a minute as the Colbert Report had the wrong date in their time stamp. The quote in question happened on the 29th, not the 31st. When we finally found it, we got the clip below.

In the clip, we can see that Hannity was actually trying to argue that political uprisings around the world like the one in Egypt happen more often when Democrats are in power in America and that they were only successful in Iraq when Republicans were. Whether you agree with this claim or not (this anti-Fox website lists a few examples to prove him wrong), it’s clear that Hannity couldn’t have been forgetting about the American Revolution. He may have been incorrect, but the quote wasn’t the complete moronic blunder that it’s being gleefully presented as.

So, if the “violent revolution” quote gets forwarded to you, you can respond with this post. You’re welcome.

Check out the original segment that the real quote came from from Fox News below. The quote is at 5:45.