Did the NSA Reveal It Spies on Its Own Employees in Sunday’s 60 Minutes Piece? 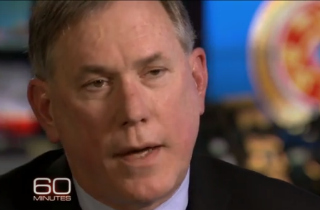 Sunday evening’s 60 Minutes special has been roundly lambasted as an NSA “fluff piece,” especially in light of correspondent John Miller‘s ties to intelligence/security officials, but Esquire‘s Ben Collins noticed another extraordinary detail about the segment: The NSA may have revealed its own creepy sci-fi caliber spying on its own employees.

Collins pointed out that during the piece, Miller had the following discussion with Rick Ledgett, the NSA official in charge of a task force investigating Edward Snowden‘s leaks:

MILLER: At home, they discovered Snowden had some strange habits.

LEDGETT: He would work on the computer with a hood that covered the computer screen and covered his head and shoulders, so that he could work and his girlfriend couldn’t see what he was doing.

MILLER: That’s pretty strange, sitting at your computer kind of covered by a sheet over your head and the screen?

One can’t help but wonder: Is their knowledge of Snowden’s private work habits from old bulk data collection or is it just typical of a government agency now to spy on its own employees? Perhaps those sci-fi-like visions held by anti-NSA activists aren’t all that far off the mark?

Wait, let’s not. Because that’s what the Fourth Amendment was created to prevent.