Did the Tea Party ‘Cost’ Republicans Virginia? The Five Battles Over Cuccinelli’s Loss 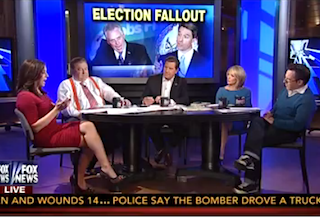 During a segment on yesterday’s election results from around the country, The Five zeroed in on the gubernatorial race in Virginia, in which liberal Democrat Terry McAuliffe beat tea party Republican Ken Cuccinelli, but not be as much as the prognosticators thought he would. Dana Perino suggested that McAuliffe, who at one point was up by 14 points in the polls, may have “started to sweat” as the too-close-to-call race wore on.

Eric Bolling thought there might be some other factors at work, pointing to the libertarian candidate who ended up getting 6.6% of the vote and was financed in part by “a very big Obama bundler” from Texas. “Is this the game the Democrats are going to start to play?” he asked. “They’re going to try to divide the party by backing a third party candidate?” If so, he said, “the Republicans better see it coming.”

Moving beyond that issue, Bob Beckel turned to the tea party, which he said prevented a more moderate Republican from running in the election. “This is another example of the tea party once again costing the Republicans a seat.”

“I disagree,” Andrea Tantaros said, refusing to fault the tea party wing of the party for Cuccinelli’s loss. Instead, she shifted the blame to establishment Republicans. “The RNC, under Michael Steele, spent $9 million to get Bob McDonnell, the former governor elected,” she said. “This time around they only spent $3 million. They have some explaining to do on why they didn’t invest resources there.”

At the same time, Tantaros said the Democrats were successful because they were able to “convince women to think that Cuccinelli was a right-wing nut.” If the government shutdown didn’t happen and Cuccinelli had focused more on the economy than on social issues, she said she believes he would have won. “That’s why I think Republicans need to wake up, because strategy matters.”