While the point of the segment seemed to be to highlight the situation while simultaneously calling out American feminists for their silence on this issue, it seems that another message may have been sent to viewers.

Early in the piece, around 12 seconds in, an image of a star and crescent — the familiar iconography of Islam — could be briefly seen flashed over a picture of the doctor reportedly involved in the alleged mutilation.

Below is a screen capture of that moment: 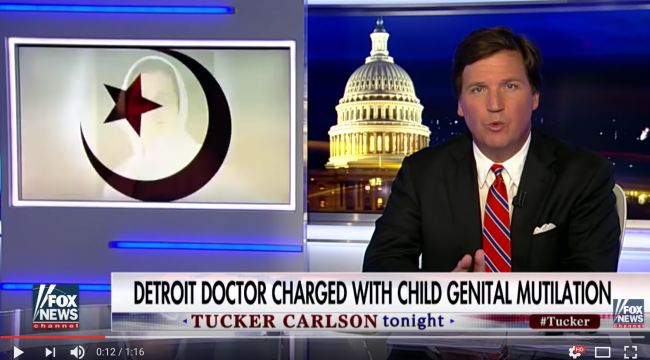 Was this an attempt to subliminally broadcast an anti-Muslim message to Tucker’s viewers? Considering that the segment itself was very critical of both Muslim immigration and the religion itself, one can’t really rule that out. Especially since Carlson’s program generally pushes what can be seen as a nationalistic, isolationist, pro-American viewpoint.

The fact is, that image is there. It is quickly superimposed over a photo of Dr. Jumana Nagarwala, an Indian-Muslim who has been accused of performing a cutting procedure on two seven-year-old girls’ genitals. Why is it flashed in a manner that could only be seen as a way to subliminally send a message? That seems to be something Carlson and Fox News should address. Especially if they don’t want to be accused of trying to surreptitiously slip anti-Muslim messaging into its broadcasts.

We have reached out to Fox News Channel for comment and will update this piece when we hear back.

UPDATE 2:35 PM ET: According to Executive Producer Justin Wells: “There is no subliminal message. The picture of the women seen in the monitor was taken from a taped piece from out Detroit affiliate, WJBK-TV, and the image of the star and crescent shape was featured immediately after her photograph in the station’s taped piece. Unfortunately, there was an editing error and it inadvertently showed up in the monitor. We regret any confusion.”

Watch a short clip of the segment above, via Fox News.