Diner Owner Thrilled To Be On Fox News (And All He Had To Do Was Make A Vaguely Racist Sign!) 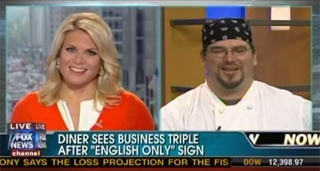 “It’s really good to have you!” beamed Fox News’ Martha MacCallum as she wrapped up her interview with interview with North Carolina diner owner Greg Simons. Things were good for him too. In fact, recently, everything’s been coming up Simons! His business is booming, he’s getting national press, and now he’s got a Fox News anchorwoman as a fan! And what did he do to inspire all this good will? Did he risk his life to save a defenseless dog? No, better than that! He’s posted a sign letting everyone know that he refuses to serve people who don’t speak English! Hooray!

Simons explained his good fortune he’s received since putting the sign up in his diner window:

“When the news broke last March, [business] tripled and I’ve spoken to a lot of people I would never think to be speaking with such as yourself, Rush Limbaugh, Glenn Beck. And I’ve gotten a lot of letters of support. I was contacted by an organization known as Pro English. Basically, if I had any civil or criminal charges brought against me, they would represent me pro bono.”

People have even suggested he start marketing and selling the signs so that fans of the diner and the English language could hang them up at their businesses. “Or maybe even at home!” MacCallum suggested helpfully.

Now, I know the PC police is out there ready to charge this guy with racism but, as Simons explains, it has nothing to do with race, just communication. In fact, just the other day he served a group of foreigners because they were smart enough to bring bilingual friends with them. See? This is such a simple explanation that MacCallum knew it would be a waste of time to question it. Or anything else Simons said for that matter.

If fact, you could tell she was pretty impressed to be talking to such an innovative entrepreneur. “It’s a very interesting story and interesting that your business has taken off since it happened,” she said beaming. Hey, maybe if she’s nice enough, he’ll give her a sign to hang up in the studio! Take that, obnoxious Fox News Janitor who always tries to get the trash can under the desk while we’re working!

Well, it looks like things have worked out well for every single person! (some may point out that things haven’t really worked out for non-English speakers who, if this idea takes off due to promotion and shilling from the media, could become second-class speakers in their own country and might also ask how Simons or MacCallum would feel if they, say, took a trip to France and suddenly found themselves unable to purchase food because every restaurant kicks them out the moment they first stutter on the word “bonjour,” but, really, people wou would say those things can shut up because this article was written in English so non-English people couldn’t read it and screw them all anyway, right?)

It’s nice to finally get to write up a happy story!