Disappointed O’Reilly Slams Mitt: ‘Romney Didn’t Do Anything, Nothing’
video

Disappointed O’Reilly Slams Mitt: ‘Romney Didn’t Do Anything, Nothing’ 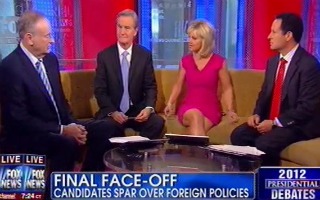 “So, was it decisive for you,” Gretchen Carlson asked.

“It was boring. It was so boring. It was the most boring debate I’ve ever seen,” O’Reilly said. “The American people were the losers. We didn’t get anything out of that.”

O’Reilly said he was disappointed that Mitt Romney failed to engage the president on the issue of the attack on an American consulate in Libya. He said that it was possible that Romney was avoiding conflict to appeal to women and undecided voters, but it was still a missed opportunity not to go after President Barack Obama.

“Romney didn’t do anything,” O’Reilly concluded. “Nothing.”