Likable guy, but not for this election cycle… no.

She ain’t running no matter what. 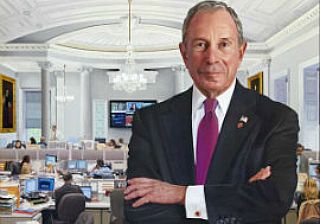 Editor’s Note: This column originally ran on August 18, 2015. It is being re-run in light of today’s news that Bloomberg is reportedly seriously considering a third-party run as an independent
— —
That’s the guy who should run for the president… as a Democrat, of course (his party of choice for over 40 years before running as a Republican for mayor of NYC in 2001).

In case you haven’t heard, Hillary Clinton is in severe trouble. If we’re reenacting the movie WarGames, Team Hillary is at DEFCON 2 (not quite DEFCON 1, but we’re almost there). Know this: The Justice Department and FBI–which aren’t politically aligned with the GOP as much as Mrs. Clinton wants you to believe they are–are only going to find more classified emails on that server-that-should-have-never-been-home-brewed. And it all it takes is one to be a criminal offense, and if that backup file of all of Hillary’s emails is found (you know…the ones she felt compelled/entitled to delete at her own behest), she’ll learn quickly that orange really is the new black.

But put all of that aside, particularly those of you who somehow don’t think this is a big deal and consider this other aspect for a moment: She is the worst major candidate to come along in a very long time. Like Dukakis-bad. Not personable. Not likable. A complete hypocrite on the signature issue of her campaign (income *cough* inequality) and one that 60 percent of the American public doesn’t trust, which is a kinda important when trying to earn votes from those of the non-myopic variety. She also specializes in the art of insulting everyone’s collective intelligence. Here’s the former Secretary of State Sunday on the email controversy:

“If I had not asked for all of my email to be made public, none of this would have been in the public arena.” Yup…she volunteered the fact she kept a home server. She asked that the emails be made public without any prodding whatsoever. And she volunteered her server to the Inspectors General and the FBI. This all would have never happened if Hillary wasn’t hell-bent on being so transparent. She’s not only a bad candidate, she’s also a bad liar.

And before you accuse the writer of being some kind of Republican sycophant, please note that the first presidential election he was eligible to vote in ended up in a vote for a Clinton in 1996. All of that said, Hillary had little margin for error in the first place before email and foundation scandals dominated every day of her campaign. Because as we learned in 2008, even being relatively scandal-free, she got blown away by a freshman senator for the same reasons listed above: Unlikable, untrustworthy, unprincipled…except now it feels she’s somehow regressed in all three categories.

So why is Mike Bloomberg such an attractive choice? Because like Donald Trump, he has an outstanding record as a businessman (without the bankruptcies). And unlike Trump, he’s actually held public office, easily winning three elections in blue New York City as a Republican and eventually as an Independent. The low crime rates of Rudy Giuliani remained and even continued to drop under Bloomberg, who was smart enough to continue his predecessor’s policies. Terror plots were thwarted. A $6 billion-dollar deficit was turned into a $3 billion dollar surplus (albeit largely by raising property taxes). And he was an environmentalist (for lack of a better word), banning smoking in most public places (before it became fashionable) and turning all taxi cabs (pre-Uber) in hybrid cars. Staunchly anti-NRA. Doesn’t necessarily need outside money (like Trump). Unlike Hillary, who runs on a flashy resume with no real accomplishments to tout under big titles of senator and secretary of state, Bloomberg has a striking political and business record to run on.

But is Bloomy a guy with charisma and charm? Not really. He has a dry wit but generally is all-business publicly and owns the kind of intelligence and quiet confidence that garners respect. And if Bernie Sanders and Trump are any indication, that’s what Americans are craving: Authenticity and self-assuredness without the homogenized sound-bites and phoniness.

Bloomberg’s platform would be simple: I can run America like I run Bloomberg or like I ran New York City for three terms, and without the perpetual scandal cloud that will serve as (at the very least) a huge distraction for a Hillary presidency and (and most) the end of Hillary as a politician in general well before she gets there. Bloomberg to voters: “I’m a problem-solver and job creator with a record to prove it, know how to work with people I disagree with, understand what delegation means in a complex environment (New York) and I keep my nose clean.”

In 2015, those three traits existing in the same sentence are a minor miracle. Or personified, they’re John Kasich (your 45th president).

This is now a race about political outsiders, or those perceived to be: Trump, Carson, Cruz, Fiorina on the GOP side. Bernie on the Democratic side.
Joe Biden is an insider. Elizabeth Warren is a non-starter (doesn’t want the job). Jeb Bush is establishment. Hillary Clinton is establishment.

People want change and someone not of the current Beltway environment so loathed throughout the country on both sides. Mike Bloomberg isn’t sexy. He isn’t perfect. But he fits the mold of what this race is about: An outsider with a deep and detailed resume with no BS in between.

Many Democratic voters aren’t so much pro-Hillary as they are anti-Republican. The thought of the GOP controlling all three chambers petrifies them, so they latch onto Hillary for lack of the better idea. They know America will ultimately never elect a socialist, so they cling to whomever they think can deliver the prize of 1600 via 270.

But when Hillary finally implodes (or is indicted), who will step in to save today in an environment that says without ambiguity, Standard politician need not apply?

If you’re voting blue, Michael Bloomberg appears to be the only answer.