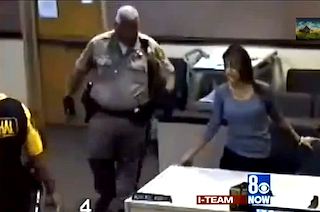 A CBS affiliate in Clark County, Nevada, has uncovered video of a disturbing incident in family court, in which a mother present for a routine proceeding is sexually assaulted and then arrested in full view of the court. An internal investigation has since revealed that both the harassment and its alleged cover-up may be part of a wider problem of abuse within the family court system.

The initial events took place in 2011, when Monica Contreras was led from the court into a waiting room for a supposed, though unexplained, drug search. She then says a court marshal named Ron Fox touched her and ordered her to lift up her shirt. When she fled back into the courtroom and complained to the hearing master, asking at least for a female marshal, Fox had her arrested for “making false accusations against a police officer.”

Contreras’ two year old daughter was present the entire time. The hearing master, Patricia Doninger, never responded as Contreras pleaded with her and the marshall to know why she was being arrested, instead turning her chair from the incident to play with Conteras’ duaghter. At one point in the video, Contreras is heard begging Doninger to turn around and watch what was happening to her.

Contreras filed a complaint with internal affairs, and Fox has since been fired—though Contreras only found that out when the news station told her. The hearing master is also “no longer employed” by the court, the station learned.

The internal investigation has reportedly uncovered numerous additional incidents of abuse in the family court, and now is investigating why none have been reported.