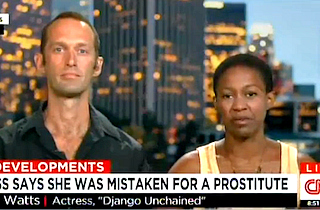 Actress Danièle Watts and boyfriend Brian James Lucas appeared on CNN’s New Day Monday morning and recounted the incident with the LAPD in which Watts was detained after she refused to surrender identification. The incident occurred after the couple had been seen kissing in Studio City, and Watts and Lucas believed, according to posts on their respective Facebook walls, that the cops mistook them for a prostitute and john. (Watts was released when the cops discovered her identity.)

“When the officer came up, he didn’t even ask me for my ID,” Watts said. “He asked Brian. He didn’t give me the respect of telling me what happened. For me, if he had come to me and said excuse me ma’am, you seem like a respectable person, but someone made a call, can we just talk to you for a second, the whole situation would have been different. He came at it with a very condescending manner which I feel is typical of law enforcement across the country right now. If we’re a country representing freedom and equality for all, then police officers should be trained in treating people with that sort of dignity.”

Co-host Michaela Pereira pressed Watts on why she didn’t just hand over her identification. (California law does not require a person to present ID to police officers, but does allow officers to detain people “for a reasonable amount of time” to identify them if there is suspicion of a crime.) “You see that if you had done that earlier, it might not have escalated that far?” Pereira asked.

Pereira countered that the ACLU “generally advises people that the best course of action is to give the police your ID.”

The LAPD released a statement to CNN reporting that a call had been received about to people matching Watts’ and Lucas’ description engaged in sexual act in a car. The LAPD did not end up charging the couple with a crime.