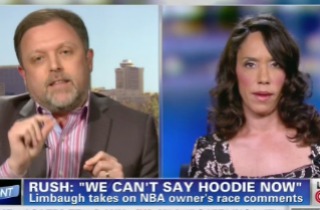 Two CNN panelists really went at each other on Friday night over Mark Cuban‘s comments about prejudice. Author Tim Wise duked it out with conservative commentator Crystal Wright over exactly what the crime rate is in the black community, with both of them yelling at each other for citing misleading statistics and scolding each other for lecturing. Wright said Cuban’s comments––that everyone’s a little bit prejudiced and we have to come to terms with that––are spot-on. And the use of “hoodie” didn’t bother her as racial because, she argued, the hoodie is viewed as a “costume of menace” and while people have the right to dress how they want, “I have a right to protect myself.”

Wise shot back that it is simply “not rational to fear a young black kid in a hoodie.” He cited a number of statistics on how low the violent crime rate is among black males and insisted it’s completely unfair to try and rationalize these biases. Wright told Wise not to lecture her like she’s a “moron,’ accusing him of being too politically correct to see the truth.

They went back and forth, talking over each other, and Wise shouted, “Do I get to finish?” They kept fighting the rate of black crime, but Wright asked, “Who’s in our jails?”, noting how a large number of black males are imprisoned at a higher rate than white males.