Doctor to Congressman: You Want Ebola Travel Ban, U.S. Military Will Have Step up
VIDEO

Doctor to Congressman: You Want Ebola Travel Ban, U.S. Military Will Have Step up 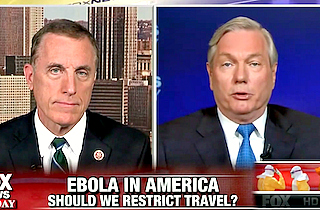 Epidemiologist Michael Olsterholm explained to Representative Tim Murphy (R-PA) on Fox News Sunday this morning why a travel ban was a terrible idea, and intimated that certain lawmakers who wanted to implement one might also consider appropriating measures to correct for the restrictions it would cause in fighting the virus in Africa.

“We really don’t effectively stop people from getting into this country [via a travel ban] — and for what?” Olsterholm said. “We’ve had one single case is so far, in the big picture. Maybe we stop another one or two more. But we do know that travel bans will seriously impact or ability to get people in and out of that area.”

Murphy said that the argument that a travel ban would prevent goods and supplies from reaching affected west African nations, where the virus originated, was nonsense, as the U.S. could clearly get goods and supplies wherever it wanted, as shown by the Berlin airlift.

Oltershold was, shall we say, less than impressed by this rebuttal.