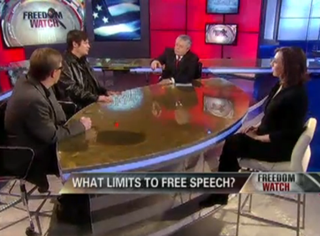 The cable news beast is most commonly fed with ideologically disparate individuals bickering over current events with varying degrees of productive value, which makes the following clip so bizarre: a high-brow philosophical discussion on natural law between four libertarians unrelated to any current event. Yes, Judge Andrew Napolitano invited three Reason writers on board to debate the ability of the Constitution to protect rights given to man by nature.

The result of taking most incendiary current topics out of a political debate and turning it academic, it appears, is something akin to the college dorm conversation– as casual as it is high-brow, all theory but extremely helpful when taking a look at reality. The writers in question, Nick Gillespie, Matt Welch, and Katherine Mangu-Ward differed on whether natural law existed– Gillespie vigorously defended the theory, Welch accepted it and Mangu-Ward dismissed it entirely– but arrived at the same conclusion: freedom of expression was inextricably linked to prosperity.

“The Constitution is a great hedge against encroachments, but it’s a piece of paper,” Gillespie argued, adding that even with the First Amendment, “free speech is encroached upon all the time!” Welch agreed, pointing out “constant exceptions” to the First Amendment: “to drive money out of politics, or people who decide that you are going to be hurting the defense of the country… the FCC regulating things for no apparent reason.” Despite this, Mangu-Ward argued that the extent to which America has freedom of expression far outpaces that of its peers, and in order to find a defense of this freedom beyond the Constitution “we just have to look at what country is the most successful, the most prosperous.”

The closest to any question relevant to the media landscape as we know it was posed by Judge Napolitano: “if all but one person in this country believes that Bill O’Reilly should be silenced, and only Bill says he has the right to speak, would that majority prevail?” Mangu-Ward replied, tongue firmly planted in cheek, “it would not be the first time all of America was wrong.”