Does Fact-Checking Need To Become The New Standard In Future Presidential Debates?

Does Fact-Checking Need To Become The New Standard In Future Presidential Debates? 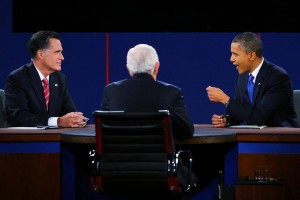 Last night’s debate was particularly notable for how little the moderator was part of the story. No one has raised any significant problems with how Bob Schieffer moderated last night’s presidential debate. But it still felt like something was missing. President Obama and Mitt Romney were leveling every charge possible at each other, and many times the debate was in desperate need of a moderator to intervene and correct both of them, or at least steer them on the right track.

Over at POLITICO, Dylan Byers argues that Schieffer set the standard for how debate moderators should do it. He said that Schieffer “got it just right,” and managed to do his job by not becoming part of the story.

I argued, following the vice presidential debate, that Martha Raddatz‘s approach should be the standard for future debate moderators, because instead of simply just letting the candidates say whatever they wanted, they were actually pressed to be specific.

Even Bill O’Reilly, who was wary of how Schieffer’s supposed liberal leanings would impact his moderating performance, thought the biggest issue with the debates was not necessarily a political bias on the part of the moderators, but a lack of willingness on their part to challenge the candidates on their facts. As he argued on CBS This Morning earlier, “I want answers to the questions.” Of course, the response to that is the same standard drivel we’ve been hearing for weeks now, that the moderator is supposed to stay out of the way and let the candidates get into it.

I don’t buy this argument that the job of the moderator is to facilitate a conversation between the two candidates. That line of thinking makes more sense if we’re talking about grade school debate team competitions, but these are two men running to be the leader of a nation, and if they are unable to account for the facts, the moderator should step in and do that for them.

This is all the more important because a number of times last night, both Obama and Romney made a few claims, and rebutting each other on the accuracy of what they just said. What it turned into was a cacophony of accusations over truths and half-truths and lies that could have easily been dispelled by a quick, unbiased fact-check from the moderator. A fact has more weight behind it when the moderator checks it, and not the other candidate.

Candy Crowley had a good moment when she fact-checked Romney over what Obama said the day after the attack in Benghazi, so perhaps there are more artful ways to do it, but the spirit of what she was trying to do should be carried out in future debates. The Commission on Presidential Debates should add that to their rules instead of nonsense like “designated walking areas” or “no follow-ups.”

What do you think? Would fact-checking be a benefit to future debates, or should the focus be on the discussion between the two candidates.