Does Jon Karl Have The Juice To Survive Benghazi Email Controversy? 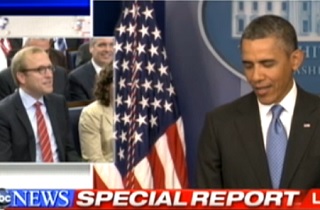 The White House’s release of the emails regarding the formulation of the Benghazi talking points has thrown ABC News Chief White House Correspondent Jonathan Karl out of the frying pan, and into the fire. Karl’s exclusive report on Friday turned Benghazi into a huge political story for a few days, until CNN’s Jake Tapper scored a scoop that exposed Karl’s reporting as misleading, at best. The full email chain further refutes Karl’s reporting, and reveals that the source of the “emails” that he “obtained” lied right to his face.Somebody owes somebody an apology.

In case you missed it, Jonathan Karl’s report on the 12 revisions to the Benghazi talking points contained multiple references to “emails” that Karl claimed to have alternately “obtained,” “reviewed,” and “(had) read to (him),” while other ABC News anchors also claimed Karl had “obtained” and “unearthed” the emails in question. Buried in the middle of that initial report was a muddy reference to “Summaries of White House and State Department email-some of which were first published by Stephen Hayes of the Weekly Standard,” and never identified those summaries as the source of his reporting. He presented those emails as direct quotes from actual emails. One such “email” was from White House adviser Ben Rhodes, which Karl reported like this:

In an email dated 9/14/12 at 9:34 p.m. — three days after the attack and two days before Ambassador Rice appeared on the Sunday shows – Deputy National Security Advisor Ben Rhodes wrote an email saying the State Department’s concerns needed to be addressed.

“We must make sure that the talking points reflect all agency equities, including those of the State Department, and we don’t want to undermine the FBI investigation. We thus will work through the talking points tomorrow morning at the Deputies Committee meeting.”

Then, Jake Tapper actually did obtain one of the emails that Karl referenced, and clearly explained that Karl hadn’t actually seen any emails, or had any emails read to him. Here’s what the Ben Rhodes email really said:

“Sorry to be late to this discussion. We need to resolve this in a way that respects all of the relevant equities, particularly the investigation.

“There is a ton of wrong information getting out into the public domain from Congress and people who are not particularly informed. Insofar as we have firmed up assessments that don’t compromise intel or the investigation, we need to have the capability to correct the record, as there are significant policy and messaging ramifications that would flow from a hardened mis-impression.

“We can take this up tomorrow morning at deputies.”

No mention at all of State, no mention of “agency equities,” and no mention of “working through the talking points” at the Deputies meeting. Karl’s source made all of that up. As Jake Tapper pointed out, Karl and/or his source “seemingly invented the notion that Rhodes wanted the concerns of the State Department specifically addressed. While Nuland, particularly, had expressed a desire to remove mentions of specific terrorist groups and CIA warnings about the increasingly dangerous assignment, Rhodes put no emphasis at all in his e-mail on the State Department’s concerns.”

Rather than admit his mistake, though, Karl oddly continued to pretend he had actual emails, referring to his and Tapper’s as “two versions” of the same email, even as he admitted that the “emails” he had “obtained” were actually “quoting verbatim a source who reviewed the original documents and shared detailed notes,”  and later in the piece, again refers to his source’s notes as “The version I obtained.”

He also tried to square the contradictions between Tapper’s real email and his own fake one, by going back at his source for an explanation. His source responded “WH reply was after a long chain of email about State Dept concerns. So when WH emailer says, take into account all equities, he is talking about the State equities, since that is what the email chain was about.”

So, the guy was paraphrasing when he fed Karl inaccurate quotes, which Karl then presented as direct quotes from the actual emails. So what?

So, this: the actual emails released by the White House not only show a completely different picture of the State Department’s concerns, versus what Karl presented, they also explicitly contradict the source’s explanation of Rhodes’ email. The long email chain was not about State Dept. concerns, it was about concerns from almost everyone concerned, mainly about prejudicing the investigation. State Department spokeswoman Victoria Nuland’s objection finally appears, it turns out that Jonathan Karl and his source took her words out of context, even cutting her off in mid-sentence.

In Karl’s initial report, he quoted “an email” from State Department spokeswoman Victoria Nuland as saying that one of the talking points ““could be abused by members [of Congress] to beat up the State Department for not paying attention to warnings, so why would we want to feed that either?  Concerned …”

What Nuland actually wrote was in reference to numerous concerns, mainly about the integrity of the investigation:

I just had a convo with (CIA Office of Public Affairs), and I now understand that these are being prepared to give to Members of Congress to use with the media.

On that basis, I have serious concerns about all the parts highlighted below, and arming members of Congress to start making assertions to the media that we ourselves are not making because we don’t want to prejudice the investigation.

Additionally, when Rhodes sent the email about respecting “all of the relevant equities, particularly the investigation,” he was responding directly to an email from then-NSC spokesman Tommy Vietor, who said “Given the DoJ equities, and State’s desire to run some traps, safe to assume we can hold on this until tomorrow?”

Vietor’s email followed a suggestion, from the F.B.I., that the Department of Justice be looped in. “They will have to deal with the the(sic) prosecution and related legal matters surrounding the federal investigation,” the email said.

Whatever you think of Nuland’s tertiary concerns about “Agency warnings,” the White House email was clearly not “talking about the State Department’s concerns,” but about all of the agencies’ concerns about the investigation, and was prompted by a need to get input from DoJ. In a draft letter to then-CIA Director David Petraeus, the CIA Public Affairs officer even explains that “The Bureau cleared with a few comments but asked that Justice, which would handle any criminal prosecution, be brought in. It is evident that will not happen tonight, and Ben Rhodes has asked that this issue be reviewed tomorrow morning at the Deputies’ meeting.”

Even the best reporter can get played by a source with an ax to grind, but by presenting that source’s misinformation as a series of direct quotes from emails that the source made up, Jonathan Karl bought and paid for the consequences, and so did ABC News. They both owe their viewers, and this White House, an apology.