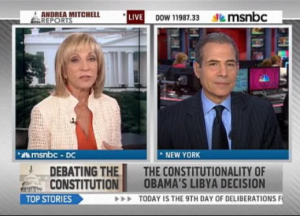 Given the current debate in Washington over the War Powers Act and presidential authority in declaring military action, TIME Magazine decided to make the Constitution the focus of their 10th annual history issue, asking “Does it still matter?”

Andrea Mitchell had TIME Managing Editor Rick Stengel on her MSNBC show to explain why they chose that particular cover story, which is guaranteed to raise some eyebrows on the left and right.

Stengel explained that the Constitution is still relevant in modern political life, but not as much as those in power would suggest.

He also explained the debate over Constitutional originalism vs. loose constrictionism, particularly the idea that the Constitution is a “living, breathing document.”

That goes to one of these issues that’s debated in our society all the time, between the originalists who interpret the Constitution as they think the framers intended versus those people who look at the Constitution as larger principles that have to be applied to the reality right now.

Mitchell pointed out that it would be difficult to know exactly what the framers would think about, say, current U.S. actions in Libya and the War Powers Act. Stengel agreed, taking on the whole “what would the framers think” argument and even suggesting that the War Powers Act may not even be constitutional. He pointed out that the document gives the president very specific powers as Commander-in-Chief, and the ultimate purpose of Congress is to “wrestle with these issues” and “find something in between” to agree upon.