Does The White House ‘Dread’ Drudge? The Five Crew Takes On The Power Of The Conservative Site
VIDEO

Does The White House ‘Dread’ Drudge? The Five Crew Takes On The Power Of The Conservative Site 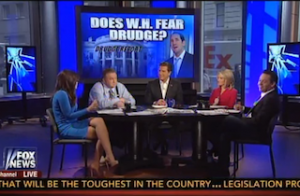 After White House Senior Advisor Dan Pfeiffer pointed out what he sees as the “damaging” effects of conservative news aggregator The Drudge Report, the hosts of Fox News’ The Five thought it was a good time to ask if independent owner Matt Drudge is on the White House’s “enemies list.”

Eric Bolling kicked off the discussion by reviewing the daunting numbers: 33 million visits in the last 24 hours, 900 million in the last month, 11 billion in the last year. With influence like that on the web and a consistently anti-Obama conservative message, he asked if the White House “fears” The Drudge Report.

“I think they do,” Kimberly Guilfoyle jumped in and said. “They are so used to getting smooched and blown kisses, that when somebody says something that might be accurate, that they may view to be unfavorable to them, they get their panties in a bunch. That’s what happens. Drudge doesn’t bow down to them, he doesn’t care. He says, I’m going to report the facts and report the truth, I’m going to tell the story, I’ve got the sources, deal with it.” Of course, as Bob Beckel rightly pointed out later in the segment, The Drudge Report simply writes headlines and link to articles others have written. There is not much “reporting” happening there.

Beckel followed up his point by saying he doesn’t think Drudge is on the White House’s “enemies list” but admitted that any time a site gets the kind of traffic Drudge gets, it has to “scare” the administration’s media operation to some degree, particularly when that “dreaded breaking news siren” appears.

Finally, Greg Gutfeld shifted the conversation by highlighting what he sees as the Drudge Report of the future: Michelle Malkin‘s Twitchy. Rather than aggregating news articles, Twitchy merely aggregates tweets. Gutfeld said he often asks himself “Is this news or not news?” when he looks at the site, but still thinks it’s “the most interesting thing he’s seen happen” recently in media.