Does Viral Video Show A ‘Frail And Frightened’ Diane Sawyer, Or A Steely Pro At Her Best? 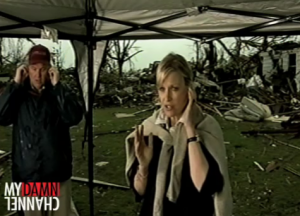 Comedian Harry Shearer, who has a fetish of some kind for watching news anchors and reporters as they prepare to go on camera, has posted a clip of ABC World News anchor Diane Sawyer as she prepped to anchor World News from tornado-devastated Joplin, MO. The eight-minute video shows Sawyer standing amid the ruins of a neighborhood–it’s cold, with rain and lightning, Sawyer and her crew sheltered by a small tent as soaked and exhausted ABC News folk set shots, lights, and try to communicate with producers in New York as the network prepares to tell the country a massive, emotional story.

Shearer headlines the video “I have nothing,” which refers to a comment Sawyer makes about having no scripts, no teleprompter, and at one point, not even IFB–the earpiece-fed link that allows Sawyer to have direct contact with her show producers in the control room in New York, as well as to hear the voices of reporters around the globe as she speaks with them. In TV, telling producers you have nothing is very important information. Sawyer displays no hints of diva-dom. Instead, she asks for clarification on facts of the storm, and says she has no clear idea how the critical top of the newscast is going to flow. All this, of course, in the minutes before that newscast goes live. To a reporter like myself, who’s done a lot of television liveshots in all kinds of conditions, Sawyer seems positively Zen in her calm. But what’s funny about that? Nothing.

Have a look and then we’ll discuss. Video from My Damn Channel:

To Shearer, “I have nothing” becomes a snarky way of suggesting Sawyer’s got a lot of nerve saying she has nothing when all around her, people have lost everything. TVNewser quotes Shearer saying his outrageously boring video “is a portrait of a fly-in anchor covering a disaster. Diane may be Diane, but this is pretty much what you get when you send high-priced anchor talent into a place where everything has fallen apart and nothing works. The quote, ‘I have nothing,’ of course, should more appropriately be coming from a tornado victim.’”

This is what you get? You mean somebody doing their job? What does Sawyer’s salary have to do with anything? Sawyer doesn’t act entitled in the least. She’s hardly focused on herself, telling the crew that if it’s dangerous to stay in their location, they should all leave. She never talks down to anyone, and even as time runs out and she’s not seen a key script involving a camera move and a live interview, she suggests it might be wiser to do the multi-element segment on tape–or at least practice it–rather than have it crash on live TV. Yes, Diane is Diane, and she never loses her cool. She’s not just high-priced talent in this case, she’s highly experienced talent. She’s the kind of person who can calmly work amid the frenzy of photographers, field producers and others all talking to her at once–while producers back in New York are talking into her ear (when the IFB connection is functioning, of course). She’s calm, clear, and authoritative to each and every one of them.

“A fly-in anchor covering a disaster” suggests a Ron Burgundy being Gulfstreamed and limo’d to the scene, asking for a makeup trailer, a cocktail, and reservations for dinner. Sawyer, as we’ve reported, is a real reporter, who doesn’t “fly-in” but rather digs in, arriving at a story and getting to work. In this case, Sawyer had arrived in Joplin early that morning and spent the entire day reporting. Again, nothing funny about that. But when she gets to the network’s live location, with its frenetic energy, it’s far easier to poke fun. After all, look! She’s putting on makeup! She’s brushing her hair!

To the gotcha gang at Gawker, Sawyer seems “confused and frightened” Are you kidding me? She doesn’t even flinch when lightning bolts crash. Oh, but wait. She does put a shawl around her shoulders at one point, and I guess to Gawker’s John Cook, shawl=frail=frightened. Of course. Cook sees “an anxious, tentative, and confounded Sawyer huddling in a shawl against oncoming storms with the destroyed suburbs at her back as her crew frantically attempts put together a broadcast. It’s a short Beckett play, about America, called ‘I Have Nothing.'”

Oh, FFS, really? I’ve done local news liveshots where I wasn’t really clear what we were about to do and my pulse was pounding in my ears to the point I couldn’t see straight. I can’t imagine being in Joplin with lousy communications, no scripts to pre-read, no idea what was happening first, and knowing hey, it’s a huge story and this isn’t a show you can mess up. Oh. And millions will be watching. I don’t see an “anxious” or “confounded” person when I watch the video. I see steel.

What Shearer doesn’t show you is the final product. When Sawyer finally went live, she still didn’t have scripts or a teleprompter. She ad-libbed the entire newscast. And she made it look effortless. And to me, that’s not really funny. It’s just impressive as hell.

But what do I know? I’m not Harry Shearer, sitting at home on the couch watching satellite feeds of journalists actually out there working in lousy conditions–just hoping they’ll laugh at a victim or shout at a member of the crew or ask for more powder on their face.

Want to see the glamorous day Diane Sawyer had “flying in” to Joplin? Here’s some perspective, from ABC News: