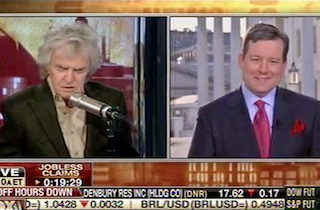 During his show this morning, which airs on Fox Business Network, Don Imus spoke to Fox News Chief White House Correspondent Ed Henry, who recently had a testy exchange with White House Press Secretary Jay Carney over the impact of the sequester. Imus immediately donned the hat of media critic, deeming Fox News the fairest of them all — questioning Henry on the relationship between the network and the Obama administration.

Of the exchange with Carney, Henry explained that he was just trying to hold President Obama accountable, and that they were both simply doing their jobs. Noting he doesn’t get involved in the “opinion stuff,” Imus asserted, “Fox News is as fair as you can possibly be — certainly as fair as CBS or NBC.” Though “NBC is not fair,” he added, and CBS is “a little bit better.” That led him to ask Henry, “Is there an adversarial relationship between the president, the administration, and Fox News?”

“I don’t think there’s any question that we have a spirited back and forth around here, but I respect the president, I think he respects me,” Henry replied. “Jay Carney and I will go back and forth, and that’s just part of the business.”

“Is the perception on their part that you’re not fair, that Fox News is not fair?” Imus pressed, but Henry said he’d let the administration speak for themselves.

Imus went on to note that Sean Hannity is a friend of his, but “that doesn’t mean I endorse his idiotic positions on anything.” His “beating on Obama every night” gets “tiresome,” he added.

He also had opinions on some other hosts. Megyn Kelly, Shepard Smith, and Bret Baier (since losing weight) are “cute” — though Kelly can get “shrill.” And Smith? Sometimes he acts “crazy, like he’s a liberal or something.”

Take a look, via Fox Business: