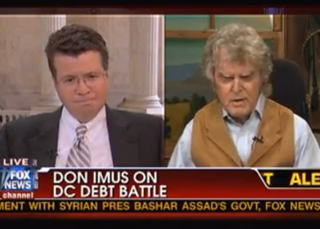 Don Imus seems as sick of this debt crisis debate as many Americans (and certainly a number of cable news personalities). He also seems apparently sick of Neil Cavuto‘s insolence, as the radio icon joined the Fox News host for a bizarre debt ceiling debate that began with Imus questioning the relationship between Rep. Ben Quayle and former Vice President Dan Quayle, had him admitting to doing “a couple of lines of cocaine,” and ended with a begrudging prediction that “[Sen.] Harry Reid and those clowns” would solve the debt problem.

“Is Ben Quayle related to Dan Quayle?” Imus mumbled, without really introducing himself or saying hello. After repeating it a second time, Cavuto dismissed him with an “oh, here we go” and “yes, I heard you, I ignored it.” And this was the first 20 seconds.

When they finally got to talking about the debt, Imus complained that the debate was “nonsense” and “makes for a good TV show,” but nobody cares. “The only people following this are people sitting at home,” he griped, “wearing their Pinheads and Patriots t-shirt, mouthbreathers, got macaroni in the microwave and waiting for you to tell them what’s going on!” Cavuto let him run until he claimed to be “out here in the real world,” which irked Cavuto enough to tell him “you have not driven anything unless it’s been pointing out directions from the backseat of a limo.” When Imus contended that he had actually arrived at his studio in his Ford F150 pickup truck, Cavuto deadpanned, “you just told a lie on national TV.”

The interview was already bizarre enough when Cavuto decided to bring up Imus’s former drug habits, comparing a default to a drug addict hitting rock bottom. “Why do we have to use unfortunate events in my past when maybe I did a couple of lines of cocaine and drank a little vodka?” he asked. “I’m using you of an example of someone down and out and on the ground,” Cavuto mysteriously responded, “soaring like a phoenix.”

The interview did end in some concert, however, as Imus suggested that “Harry Reid and those clowns” would repair the situation, and lamented the “absurdity” of Cut, Cap and Balance. “The only thing [Speaker John Boehner] didn’t do is cry, which would have made it at least entertaining,” Imus lamented.