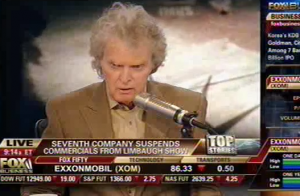 Imus expressed anger over Limbaugh’s apology, pointing out that it was done on his website and not in person.

“A lame apology on his website, in which he says he didn’t mean to personally attack her,” Imus said, “is gutless.” Imus took issue with Limbaugh’s “sustained, vile, personal attack” on Fluke over three days, and said that if he’s going to apologize, you have to “go sit down with her” and apologize.

“He’s a fat, gutless loser,” Imus added, “and if I’m running a radio station, he’s not on it… until he does that.”

Later in the show, during another news report, Imus added a few nuggets to his argument. He re-iterated his belief that Limbaugh needed to apologize to Fluke personally, again calling him gutless.

“It’s the worst kind of cowardice,” Imus said. “Maybe he’s still jacked up on the Oxycontin, or whatever it is, but you can’t say stuff about somebody and not, 1) own up to it, and, 2) have guts enough to go sit down with her and say, ‘Look, I’m sorry and I won’t do this again.’ But no, he’s a punk.”

…and his later take on the situation here, courtesy of Fox Business Network: