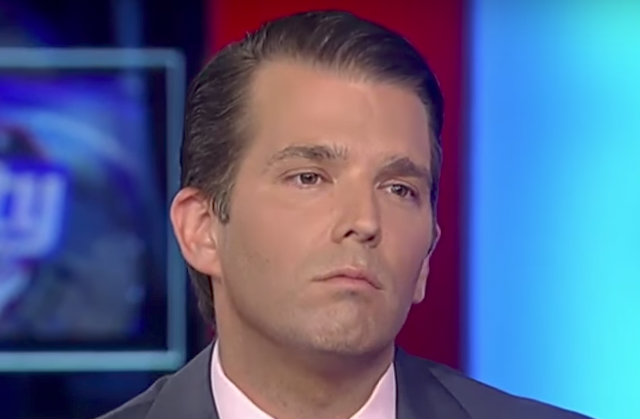 Donald Trump Jr. has stepped into the political media outrage debate, aka “Fredo-gate.”

At issue is Chris Cuomo and a video that has gone widely gone viral that depicts the CNN primetime anchor going off on an individual who appeared to be hectoring him and his family while they were hanging out at what appears to be the outdoor hotel/bar Sunset Beach in Shelter Island, New York.

Cuomo took issue with the individual calling him “Fredo,” which is the name of The Godfather character who turned on his family, a modern-day take on Judas as it were. In the clip, we can hear Cuomo saying that calling an Italian-American “Fredo” is a slur akin to using the N-Word,  which has engendered another strange semiotic debate on the Internet. But back to Don Jr…

Hey @ChrisCuomo, take it from me, “Fredo” isn’t the N word for Italians, it just means you’re the dumb brother. ? https://t.co/sgg6yF7UDO

The ephemeral meaning of words — and this case, fictional characters names — has never been on clearer display here, as Don Jr. is far from the only opinion that matters. Sure, he may have some expertise on what it’s like to either be (or have) a “dumb brother,” but someone with German and Czechoslovakian descent, he may not find the same meaning in “Fredo” as does someone who self-identifies as Italian-American. To wit, the supportive insights provided by fellow Italian-American, Anthony Scaramucci:

Chris Cuomo Threatens Man Who Hurled Italian Slur ‘Fredo’ at Him very proud of ⁦@ChrisCuomo⁩ this happens all the time. It’s quite racist. https://t.co/RWzqqzpDWE

Ironically, a clip from Chris Cuomo Tonight has also recently gone viral that shows frequent guest and CNN contributor Ana Navarro calling Don. Jr. “Fredo” in a tense debate with Trump supporter Steve Cortes, which you can see below:

.@ananavarro slams Don Jr. for likening border wall to zoo fence: He’s an “entitled, rich, spoiled little brat whose only call to fame is being his daddy’s son.”
“[D]addy kept Fredo back home…Who cares what [he] says. I don’t want to talk about that entitled little brat.” pic.twitter.com/zpTtp8ZfAd

So is Cuomo a hypocrite for not calling out Navarro’s use of “Fredo” during his show? Or does the use of that slur have very different meaning and intention when it’s used against someone with such proud Italian-American heritage?

Like I said, the ephemeral nature of meaning. If you are inclined to support Cuomo, you see his point. If you are pro-dumb-brother, then you are likely Don Jr.

And the wheel in the sky keeps on turning…