Don Lemon Asks Guests: ‘Is Islam More Violent Than Any Other Faith?’ 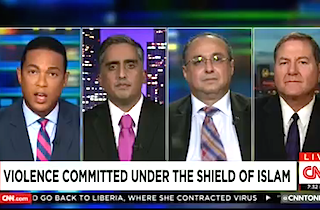 Following the execution of a second American journalist by the Islamic extremist group ISIS, CNN’s Don Lemon assembled a panel of guests in an attempt to answer a fundamental question: “Is Islam more violent than any other faith?”

, began by saying other religions “have probably some text that may lead to violence if you understand them literally” but unlike those religions Islam has not “reformed” yet. Asked for a yes or no answer by Lemon, the author said yes, “today, it is more violent.”

Former FBI assistant director Tom Fuentes agreed, saying, “Yes, it must be, otherwise how could all these groups take the name of Islam to become violent and do what they do?” He pointed out that ISIS calls itself the “Islamic State,” adding, “We didn’t pin that name on them.”

Only one of the three guests, The Islamic Monthly Magazine’s Arsalan Iftikhar, stood in opposition to Lemon’s suggestion. “I find it absolutely astounding that a former assistant director of the FBI would say that Islam a more violent religion than most other religions,” pointing to extreme “Christianist” organizations in the United States.