Don Lemon Blasts Ben Ferguson Over Racial Profiling: ‘Who Are You To Tell Us We’re Not Having That Experience?’ 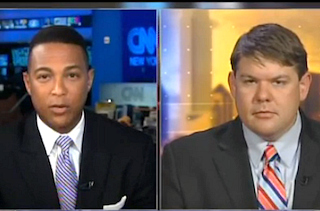 CNN host Don Lemon and conservative commentator Ben Ferguson had such a vociferous argument over racial profiling on Saturday afternoon that they ran well over the commercial break, with Lemon continually waving his producers off to continue the debate.

The fight after Barack Obama’s speech Friday, in which the president described his experiences of people clutching their purses or locking their car doors when he passed by. Ferguson accused Obama of stereotyping all white women as profiling black men. Lemon called in to CNN to share experiences similar to the president’s (see video below), which led to Ferguson coming onto Lemon show, where he doubled down on his argument.

“I have seen women, when I go to my parking garage every day, they are nervous when they are by themselves, regardless of the age or the man that’s around them because they’re in a vulnerable situation,” Ferguson said. “That’s not only during issues of race.”

“If you think it’s equal [between white and black men], and I dont mean to call names, but I think you’re sadly naive,” Lemon said.

“Are you saying Don, that every woman in America that’s white is automatically, 100% of the time terrified of an African American man in any one of these situations, but they would not be terrified if it was a white or Hispanic man?” Ferguson asked. “That’s an incredibly broad brush. That’s what you’re implying—”

“That’s not what I’m implying, that’s what you’re hearing,” Lemon said. “I’m telling you my experience, the president’s telling you about his experience. And you’re saying that we’re not having that experience. Who are you to tell us we’re not having that experience, when you’re not living it? You’re not in our bodies. It’s insulting for you to say, ‘No that’s not happening.’ You don’t live as a black man, you don’t know that.”

Ferguson maintained that he had grown up poor and in a racially diverse community, giving him insight into the experiences of racial profiling. “I have been profiled, police have told me I’ve been profiled, but I don’t assume that every African American man, even though two of them have shot at me from point blank range, are out to kill me,” he said.

“You have a certain entitlement as a white person that people of color don’t have,” Lemon responded. “You don’t see that?…You’re filtering [this] through a place of privilege that you don’t understand. Your privilege does not allow you to see certain biases and certain circumstances in society.”

Ferguson still tried to argue that Obama had said all white women were scared of black men. “You’re putting words in the President’s mouth,” Lemon told him.

“He said that they clutch their purse,” Ferguson said.

“He’s said he’s had experiences where people do that. He did not say that every white woman did that,” Lemon said. “That’s taking quite a leap. If he wanted to say that, he would have said, ‘All white women.'”

Watch Don Lemon calling in to CNN on Friday, after Ferguson’s initial comments: