Don Lemon Delivers Wake-Up Call to Chris Brown: Your Friends ‘Don’t Give a Damn About You’
AUDIO

Don Lemon Delivers Wake-Up Call to Chris Brown: Your Friends ‘Don’t Give a Damn About You’ 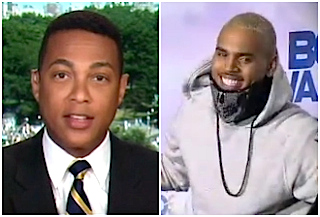 CNN anchor Don Lemon delivered an open letter of sorts to R&B singer Chris Brown, who was recently arrested on yet another assault charge after an alleged brawl in Washington, D.C. “Not everyone talking in your ear has your best interest at heart,” Lemon told Brown.

Lemon began by saying he’s “conflicted” about turning the singer into “the poster child for bad behavior, especially for bad behavior among young black men because he’s a young black man.” He listed off white celebrities like Justin Bieber, Lindsay Lohan and Charlie Sheen who have had their own “run-ins with the law” to demonstrate that Brown’s problem is not unique to his race.

He recounted the litany of violent incidents Brown in which has been involved, from the domestic abuse of then-girlfriend Rihanna up to his most recent arrest. Lemon said he “felt sad” that Brown’s fans are still willing to fawn all over him even after these events. He then laid out his advice:

“Okay Chris and I mean this with all honesty and with the best of intentions. I’ve been 24-years-old before and felt invincible; that fades over time and with age comes wisdom and you realize that not everyone talking in your ear has your best interest at heart.

Most of the people you think are your closest friends or closest to you: your boys, your fellas; they don’t give a damn about you.

Don’t listen to the people who tell you that everyone who is criticizing you is a hater, they’re not. That criticism is very valuable because those people have nothing to gain from your fame, or your fortune. They are not on your payroll and probably don’t want to be.”