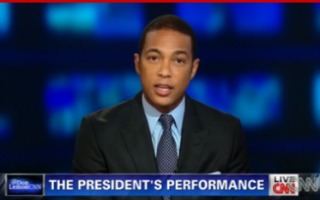 CNN’s Don Lemon took a look at the responses to — and excuses for — what they perceived as President Obama’s disappointing debate performance last week… And even offered the President some helpful advice.

Showing clips from Chris Matthews‘ post-debate venting session and from both David Axelrod and Robert Gibbs‘ spintastic Sunday morning news show appearances, Lemon summed up the pervading message thusly: “What they’re saying is ‘you lie.’ Remember how those words went over when a Republican said it? Just saying.”

He also shared excuses — like Al Gore chalking up the President’s performance to Denver’s high altitude, and the talking point that he simply had “other things on his mind.”

Then, after showing John Sununu’s comments about the President seeming “lazy” and “detached,” Lemon (who rejected the assertion that anyone who keeps the schedule the U.S. president does can possibly be anything approaching lazy), gave Obama a piece of advice:

…If I may, Mr. President, some advice — and I would say the same thing to Mr. Romney had he performed as poorly during the debate, so this isn’t partisan. So, with all due respect, Mr. President, with all due respect, if you want to show the right, left, and in between that you’re not “out of your league,” then stop looking at your notes. Stop writing while someone else is talking. Do what my mom — and I’m sure your mom and many moms across the country tell their children, what they teach us — look people, no matter who they are, dead in the eye. Even when you’re tired, down, or maybe even intimidated. And stand up for yourself, because no one else will. That’s my advice.

As he pointed out, that’s way less harsh than Jon Stewart’s advice. Have a look, via CNN: