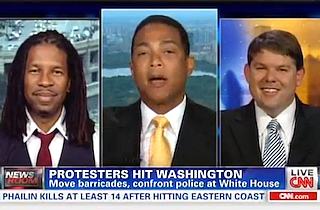 A panel led by CNN’s Don Lemon erupted Sunday afternoon over the “Million Vet March on the Memorials,” a protest against the closure of the World War II Memorial due to the government shutdown—a march that also featured a Confederate flag, speakers calling President Barack Obama Muslim, and Nazi references.

“Ben, you have to be embarrassed by this video,” Lemon said to conservative radio host Ben Ferguson. “You’re not embarrassed for some members of your party?” When Ferguson tried to argue that the protest was comprised of a handful of people not affiliated with conservatives or Republicans, Lemon cut him off. “Who initiated this protest? It was tea party Republicans. Cut the crap.”

“Cut the crap?” Ferguson said. “I love how you assume that everybody that’s a conservative or tea partier was going to be out there today. If that was true, why wasn’t there a million tea party people out there? There wasn’t because this is not the vast majority of the tea party. So I’d say to you cut the crap and quit trying to label us with a blanket statement.”

Lemon played a clip of Freedom Watch’s Larry Klayman telling Obama to “put the Quran down” and resign the presidency.