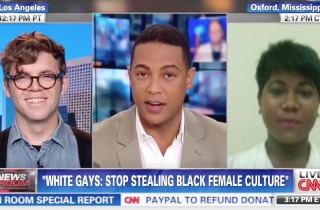 CNN’s Don Lemon took on a pretty heavy subject today: are white gay men stealing black female culture? That’s what University of Mississippi senior Sierra Mannie argued in a column that lit up the internet so much, TIME Magazine republished it. In the column, Mannie expresses exasperation that some white gay men do things like “call yourself Quita or Keisha or for which black male you’ve been bottoming”; to her it’s upsetting because white people like to enjoy all the good parts of black culture but will simply never understand the true black experience, one that includes discrimination and “the dangers of simply living while black.”

Mannie also argues that whereas white gay men are not automatically discriminated against because you can’t tell sexuality just by looking at someone, it is not the same when it comes to race.

Writer H. Alan Scott penned a response, acknowledging the struggles of black women, but also pointing out white gay men do know what discrimination is like, even if sexuality isn’t as obvious a trait as race. He argues no one’s stealing anyone’s culture, just that people are able to appreciate each other’s culture in the melting pot that is America.

So with all that in mind, Mannie and Scott faced off on CNN today. Scott argued that gay men love the “affirming awesomeness of black women,” but Mannie said it frustrates her that gay men always come up to her and call her “Shanaynay” with a kind of stereotypical accent. Lemon jumped in to say, “You may think that it’s something that is funny and cute… but what you’re doing is almost a minstrel show in some ways.”

Scott shot back that black people are “perpetuating the stereotype” with these cultural offenses. Mannie argued that “certain things do belong to people of certain cultures,” but Lemon pushed back a bit by saying, “People don’t own certain things because they are of a certain color.”

You can watch the full segment here, via CNN: