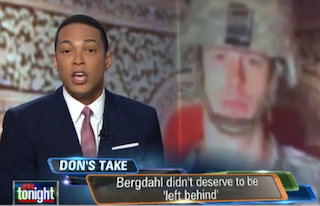 At the top of his 10 p.m. show on CNN last night, Don Lemon issued a word of caution to everyone out there who has been condemning the release of U.S. Army Sgt. Bowe Bergdahl after five years in captivity with the Taliban. “To me, he is still an American,” Lemon said.

“The reaction to his release from enemy capture Saturday has been odd, to say the very least,” Lemon said. He referenced a viewer email wondering if the Obama administration timed Bergdahl’s release to distract from the ongoing VA scandal, a notion also put forth by Sarah Palin over the weekend. And he pointed to others who believe President Barack Obama broke the law by failing to give Congress 30 days notice of the release of Taliban detainees.

“That military mantra of, you know, ‘no man left behind’ that we’ve heard so much since 9/11,” Lemon said. “We haven’t heard so much of it in the last few days from many who openly supported going to war in Afghanistan and Iraq and claim to support the troops.”

Lemon admitted that he “doesn’t know” if Bergdahl was a “deserter” as his fellow soldiers have attested, saying that no one knows from sure but Bergdahl. “And unless and until he says so, to me, he’s still an American, a war veteran, a sergeant, who does not deserve to be left behind.”