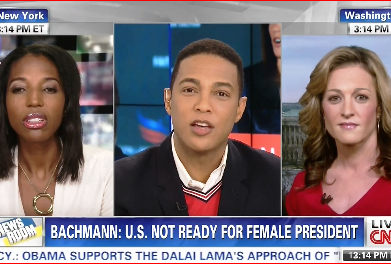 CNN anchor Don Lemon lashed out at a conservative guest during a panel discussion about Rep. Michele Bachmann (R-MN) blaming gender bias for her poor performance in the 2012 GOP primaries. When conservative Emily Miller insisted that gender bias did factor into how she was treated, and that “white guilt” played a role in President Barack Obama‘s two elections, Lemon and his liberal guest laughed at her.

Miller began by saying that the press is taking Bachmann’s comments out of context and clarified that the Minnesota lawmaker was saying that many voters are less likely to vote for a woman than they are, for example, for a minority. “I think there’s a lot of truth to that,” Miller explained. “I think there is still white guilt over a what is happened…”

“And they were still guilty four years later?” Lemon interjected.

“I think so,” Miller replied. “He obviously didn’t win on the merits.”

“So, white people felt guilty enough to vote for Barack Obama the first time and then you are saying, in your estimation, he did a terrible job, and they were so guilty that then they again voted for him — they were stupid enough, if they felt that way to vote for him again?” Lemon asked. “That’s insulting to Americans.”

“No, it’s insulting to the president,” Miller shot back.

“I think that’s incredibly insulting,” Goff added. She continued that Bachmann or any other “privileged white lady” should attempt to explain their situation to the parents of slain black teenagers Trayvon Martin or Jordan Davis.

“The Trayvon Martin case had nothing to do with race,” Miller began as both Lemon and Goff laughed again.

“Oh my God, it does not make sense,” the CNN anchor concluded.