CNN Anchor: Nugent ‘Sounds Like He’s Apologizing to Himself’ or Republicans
video

CNN Anchor: Nugent ‘Sounds Like He’s Apologizing to Himself’ or Republicans 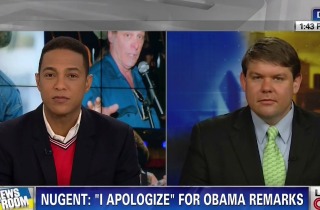 “It did not sound like an apology to me,” said CNN anchor Don Lemon on Friday in a segment with conservative radio host Ben Ferguson. Ferguson, who had recently conducted an interview with rocker Ted Nugent, revealed that the rock star admitted that he went over the line when he called President Barack Obama a “subhuman mongrel.” Lemon said that the caveats Nugent appended to his apology render it insufficient.

“It didn’t sound like an apology to me,” Lemon began. “Here’s an apology: Ben, I’m sorry. That’s an apology.”

Ferguson said that he spent two segments on his radio program speaking with Nugent and in the second he asked Nugent if he would issue an unqualified apology to the president which Ferguson says the rocker did.

“He said ‘Yes, but,’” Lemon continued, summarizing Nugent’s apology for the inflammatory comments. “He sounds like he’s apologizing to himself or, possibly, to powerful Republicans who might have gotten him to take it back and do it fast.”

“It didn’t sound like an apology to me. As I said, an apology comes without caveat,” the CNN anchor added. “If you’re sorry, you’re sorry. And there are no strings attached to an apology.”

“You may not take his apology,” Ferguson observed. “Looking at Ted Nugent, this is the best apology that he’s ever done, as he put it to me, ever in his life.”

“Perhaps he needs some lessons in apology and apologizing,” Lemon concluded.