Don Lemon Rails Against Lack Of Restrictions On Guns: ‘Who Needs An Assault Rifle To Go Hunting?’
video

Don Lemon Rails Against Lack Of Restrictions On Guns: ‘Who Needs An Assault Rifle To Go Hunting?’ 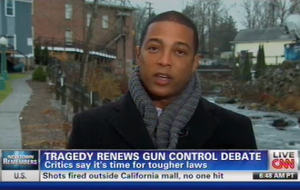 During a CNN segment on Monday morning, Don Lemon and Will Cain discussed the issues of gun control and mental health, in the aftermath of the school shooting in Newtown, Conn. Veering into commentator mode, Lemon made an impassioned case for restrictions on access to certain weapons.

“Yes, we need to address mental health, but mental health in this particular issue, let’s not get it twisted, is a secondary issue,” Lemon said in response to Cain’s argument. “If someone who has a mental issue did not have access to guns that should only be available in war zones, we would not be dealing with this.”

To say “gun violence is down does not make sense, and to me is insulting to everyone who lost a loved one here and is dealing with that. It doesn’t matter if gun violence is down,” he continued. “We need to get guns and bullets and automatic weapons off the streets. They should only be available to police officers, and to hunt al Qaeda and the Taliban, and not hunt elementary school children.”